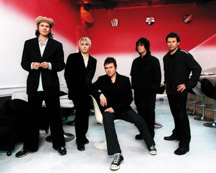 First of all, let’s give a big shout out to the Pacific Amphitheatre and their staff. They've supplied a reward for those trekking beyond the Orange Curtain with the most eclectic programming to hit a venue in a long time. It was a trip getting a rustic county fair rendezvous with petting zoos, tangy BBQ and rickety carnival rides, and then hitting the 9,000 seat venue for everything from Diana Krall to Roxy Music and the New Doors to 311.

This retro reviewer with a passion for the ’80s took in two of the era’s artists born from the art of music video: Duran Duran one humid night and the Devo/Cake combo platter under a picturesque sky.

Duran Duran took 10 years to get their original five-man lineup together, and this was their second gig on American ground (after a not-so-secret Roxy show the previous night). But the sell-out stands hit fever pitch right from the second the spotlights guided the Taylors Three, slick Simon Le Bon and romantic Nick Rhodes to the stage.

None of the past pomp and circumstance could be found. No elaborate sets, pompous egos or overblown performances filled the night. Instead, their VH1 classic image of being fashion plates seemed to be at full throttle.

Seeing a dapper-suited John Taylor lean under the Johnny Cash-black Andy Taylor to grind guitars was a thrill. And, from witnessing Le Bon gyrating in one of three different khaki get-ups to the way-too-absent thumps of Roger Taylor’s drums, it was plain to see that the wild boys will forever shine by simply enjoying each other’s musical chemistry. Rhodes never left his classic brood and cracked smiles behind the keyboards, and damn it, we like him that way!

The set list was a truly solid showing of no-nonsense hits with an endgame of "Careless Memories," "Rio," "Reflex" and the coup-de-grace "Girls on Film," with video backdrops that only made one’s hair spikier. Their few killer new tunes had them grasping a new, poppier sound, probably so they can stay afloat in the present sea of Justin Timberlake sludge.

Devo didn’t take the steps Duran Duran took to try and update their image. Instead, the spud boys chose to remind the 5,000 or so strong audience that they can still "Whip It" good! The treat for fans was Mark Mothersbaugh, Gerald Casale, the Bobs and skinster Josh Freese who went all the way back to the beginning of their evolution (or, rather, de-evolution).

After a more modern trifecta of "That’s Good," "Girl U Want" and their signature hit in their yellow trench coats and bright red power domes, the boys peeled their banana-colored clothes to reveal their basic black T-shirts and kneepads.

Mothersbaugh pumped his fist as he drove the old Moog keyboards hard, proving that they have always been a rock band first, synth saps second. "Come Back Jonee" and "Mongoloid" showed further proof that both Bobs are guitar geniuses, drilling out solo after solo of grinding buzz over the keyboard fuzz.

Cake was the perfect opener for Devo, with the same rhythmic urgency, but more basic, similarly quirky, instrumentation. The vocals and acoustic guitars of John McCrea melded seamlessly with Vince Di Fiore’s trumpet on fan favorites "Short Skirt, Long Jacket" and "Stickshifts and Safetybelts," ending with a boisterous encore of "Meanwhile, Rick James."