The Devil's Rejects: Rob Zombie Says His Latest Kill Fest is Anything But a Sequel 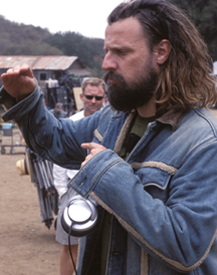 Where does someone even GET the name The Devil’s Rejects? "I just have a bunch of titles floating around in my head," says Rob Zombie, "and this one seemed to fit for the film."

Looking at Zombie – his head bearded with a ’70s style mane of long brown hair – one wouldn’t expect the macabre onstage antics that have defined Zombie’s music and his inaugural filmic outing, House of 1000 Corpses. The only thing that gives the filmmaker away is a tattoo of screaming heads that protrudes from beneath the sleeves of his long-armed striped shirt. That and his reaction when someone mentions Devil’s is a sequel to Corpses.

"No. Not a sequel," Zombie’s stoic. "I hate sequels. Because a sequel by nature is just the same story again with a number two next to the title. Rejects is its own movie, with some characters that carry over from the previous film." These characters are Baby (Zombie’s wife Sheri Moon), the demented clown Captain Spaulding (Sid Haig) and cold-blooded (hell, ANY-blooded) killer psycho Otis who, after their House of 1000 corpses is raided, embark on a killing spree as they try to escape vigilante Sheriff Wydell (William Forsythe).

Zombie responds to criticism of violence in cinema just as matter-of-factly. "People may say the film, with all its killing, has too much violence. But I’ve found that it was when I wasn’t entertained that I would go out and do something destructive. Hopefully, people will be entertained by this film."

Zombie says that he and close pal Alice Cooper were discussing the ludicrous notion that prisons were filled with people that listened to their music. "It’s preposterous to think that people will go out and kill because of this movie. Maybe they’ll be entertained and that will take their mind off killing."

Doubtful, given the body count in the film. What may take the viewer’s mind off the death is the equally killer soundtrack featuring ’70s icons Lynrd Skynrd, Muddy Waters, Steely Dan and The Allman Brothers. While Zombie’s impeccable musical choices may not offer any surprise (he is, after all, an acclaimed music video director) he also has an equally impressive filmic knowledge – the film borrows from ’70s cinematic staples Texas Chainsaw Massacre, Dawn of the Dead, Taxi Driver and A Clockwork Orange.

"I love the fashion and feel and, obviously, music of the ’70s. And those films are the punk rock of movies. While everyone else was running to see generic studio films, me and my friends would go see Dawn of the Dead at some obscure drive-in in the bad part of town.

"Rejects is, in a lot of ways, like a super-violent western, too," Zombie continues, visually quoting scenes from The Wild Bunch, The Gauntlet and Bonnie and Clyde. "I used a lot of intense Sergio Leone style close-ups on people’s faces. I wanted it to be gritty. I wanted to see junk in people’s teeth, see the sweat on their burnt skin." A horrible thing to hear, but Zombie says it with such earnest didacticism that it comes off as an auteur explaining his work. Still, one can’t skirt the question that we are still watching people kill one another – what’s the appeal there?

"They’re the tough kids you wanted to be in high school," Zombie avers, having clearly spent a good deal of time thinking about this. "Think of Charles Manson. He’s obviously a horrible person who has been connected to horrible things; yet he’s fascinating. He’s so charismatic you almost don’t care. Let’s face it. Cool gets you a long way in life." I look again at his tattoos. "You can be a real asshole, but as long as you’re cool, it buys you a lot of slack."