The Greatest Movie Ever Sold: How Product Placement Made Morgan Spurlock Speechless 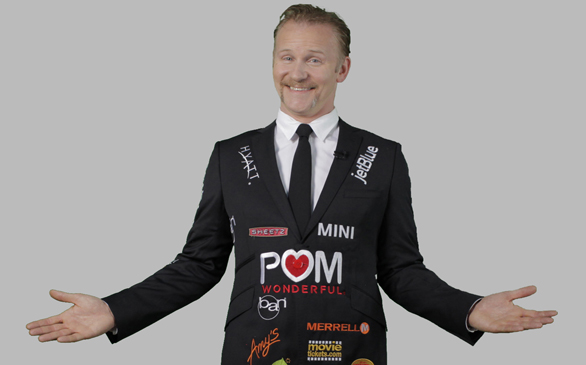 Morgan Spurlock is a modern-day whirling dervish. Wearing a sharp black suit littered with product placement logos that make him look like the upscale version of a NASCAR racer, Spurlock walks into a private conference room at the Andaz Hilton – one of his sponsors – his fingers furiously tapping out messages on his phone.

“We’re in post [production] on the Comic-Con movie right now so I’m communicating with people in New York while we’re doing this,” he explains convivially, referring to his upcoming documentary about the annual geekfest in San Diego, as he puts his phone down and turns his attention to the subject at hand, The Greatest Movie Ever Sold, his incredibly meta latest effort. It’s a film about product placement and co-branding, brought to you by companies such as POM Wonderful and JetBlue.

Spurlock says his inspiration for the film came from the show “Heroes.” In one particularly blatant episode, the director describes, “Hayden Panettiere is given a car. It cuts to the front of this car and then back to her face as she goes, ‘The Rogue! The Nissan Rogue?!? I can’t believe it’s the Nissan Rogue!’ And I was dumbfounded that this commercial happened right in the middle of a show. I was flabbergasted, just speechless. I came to work the next day, and we started talking about all the terrible product placement that’s in movies and TV shows and said ‘Why not make a film that looks at this kind of marketing and get brands to pay for it?’”

It’s that kind of thoughtfully subversive brilliance that’s made Spurlock a star in the realms of independent and documentary filmmaking, but he swears it isn’t something practiced or planned. In fact, when asked if there’s a formula to becoming the next Morgan Spurlock, the director can only laugh.

“I remember when M. Night Shyamalan first made The Sixth Sense, he said, ‘I have the formula for success. I know the secret to make hit movies.’ Which apparently didn’t last,” he says with a Cheshire Cat grin. “I don’t think you can claim that there’s something that’s the golden egg. What ultimately makes films work best is when it’s something you’re passionate about. For me, what I think has helped my projects work is that I’m willing to let my guard down and be honest with the viewer.”

It’s Spurlock’s brand of revealing, thought-provoking yet irreverently humorous filmmaking that has won over audiences who might not normally consider themselves documentary fans.

“I think we’re constantly fighting this PBS stigma. PBS ruined it for everybody,” Spurlock decrees. “They really did. Ultimately they painted a view of what documentaries were, so you’re fighting this idea that they’re not entertaining, that they’re not great movies. Man on Wire was an amazing film. Alex Gibney makes brilliant documentaries. Michael Moore showed they can actually be entertaining; Errol Morris, the same thing. I want to make films for a larger audience. When people go to see a movie on a Friday night, I don’t want my film to be their fourth choice, I want it to be their first choice. To do that, you have to make something entertaining enough that it can compete on the level of a big Hollywood movie.”

As one of the poster children for independent moviemaking, Spurlock admits that state of indie film isn’t as rosy as it was a decade ago.

“An amazing thing happened right around 2000 which was a massive democratization of cinema, where anyone with a camera, a computer and a good idea could make a movie,” he explains. “So now you’ve got studios and independent filmmakers fighting for the same space, and it becomes harder to get a film into the marketplace. Now you’re competing with so much outside of cinema: online, iPads, television with 500 channels. It’s a difficult business to be in, but the key to success, at least for me, is forward momentum. If you’re going to be an independent filmmaker you can’t just sit around and pat yourself on the back and say, ‘Boy, that was a great one.’ You have to be in motion.”

With that said, our interview ends, Spurlock shakes my hand, grabs his phone and makes a phone call that begins with the word “Comic-Con.”

The Greatest Movie Ever Sold releases in select theaters April 22.