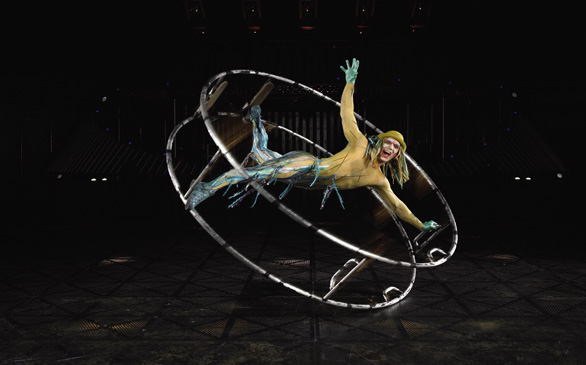 “I get knocked down, but I get up again. No, you’re never gonna keep me down.”

“Falling is part of learning.”

The first of these quotes comes from a little green sensei, then there are the indelible lyrics of Chumbawamba and, finally, are the wise words that stuntman and “Quidam” performer Cory Sylvester has come to live by.

After pursuing a career in special make-up effects, Sylvester had a life changing experience when he went to see the Cirque du Soleil show “Quidam” and witnessed the German Wheel for the first time.

“I saw this warrior up on stage moving and manipulating this thing around,” Sylvester says over the phone, his voice reverent. “It struck me and really gave me something to want to run with.”

He was so taken, in fact, that he decided to change his entire life and enroll in circus school in Montreal, a gateway to Cirque, where he could perfect his craft. Years later, after a dalliance in the superhero business with stints as Spider-Man at Universal Studios and Batman in the stunt show at Magic Mountain, our conversation is taking place during a break in San Francisco where “Quidam” is being performed and Sylvester is one of the show’s stars.

If you don’t know what the German Wheel is, Sylvester explains, “It’s basically a big wheel, and I put myself inside of it and roll around like I’m inside a big coin. It’s a two-railed wheel, as though you bent a ladder into a perfect circle and took off a couple of rungs so that there’s only enough for feet and hands.”

There’s a classic scene from The Toy where Richard Pryor climbs into an inflated gadget called a Wonder Wheel and slowly somersaults across a toy store; think of that as the super low-octane version of what Sylvester wanted to master. Invented in 1925 by Otto Feick, the son of a blacksmith, who was inspired by a childhood memory when he had tied sticks between two beer barrel bands that his father had made and rolled down a hill inside of it, the German Wheel is not for the faint of heart, weak of stomach or lazy of mind and body.

“It takes a lot of strength and focus on feeling and technique,” Sylvester says.

His segment of the show usually runs five to seven minutes, which might not seem that long if you’re sitting on the couch eating Cheetos, but when you’re performing gymnastic feats while rolling around in a heavy metal contraption, it’s a serious undertaking.

So how hurt has the performer gotten?

He laughs at the query.

“Uh, well, it’s definitely more dangerous than doing laundry, I’ll tell you that! But you’ve got to take your falls,” he explains. “You have to acquire a few bumps and bruises to get the hang of it, especially in the early training years. When you don’t have a sense of how to do it, falling is part of learning.”

To begin, Sylvester started with what he calls “boring, basic stuff,” like standing in the wheel and slowly rolling back and forth, getting “a feel for the wheel,” before eventually grabbing onto the handles and going all the way over and back, “like doing a cartwheel. Doing a handstand for the first time was a really big deal.”

But that was then. Nowadays, after years of training, doing stunts and working on his core strength, Sylvester says he can bust one out anytime, anyplace, even after a few drinks.

“It’s a great trick at parties,” he offers with a chuckle.

While many people may joke or dream about running away with the circus, Sylvester, who says he hopes to one day open a center where people can learn circus and other creative arts, has actually done it, with an unexpected byproduct. Asked what his favorite part of the show is, he replies, “It’s the people [in the show] who are from all different parts of the world. But the one of the things I love about this the most is going home and seeing my family.”