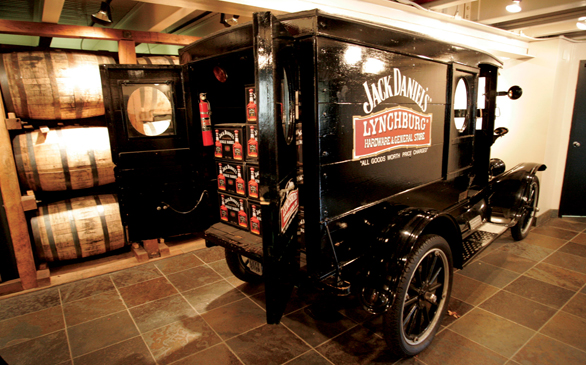 Take a Sip of the Jack Trail

If you’re thinking of heading to Manchester, Tenn. for Bonnaroo this June, you should know that you’ll be just a stone’s throw from Lynchburg, home of the Jack Daniels Distillery, and on the route of Tennessee’s latest self-guided driving tour, the Jack Trail. There’s an emphasis on music all along the Jack Trail, which begins appropriately enough amongst the honky-tonks of downtown Nashville.

All in all, there’s something for everyone along the trail where more than 300 tourism sites include places like the nationally-recognized Martin’s BBQ Joint in Nolensville, historic homes in Murfreesboro, sites connected to the famous high-stepping Tennessee Walking Horses and of course along the way you can find out all you need to know about whiskey making.

There are four distilleries on the trail that offer tours and sample sipping, but by all means don’t miss the oldest registered distillery in the United States and the place that lends its name to the Jack Trail, the Jack Daniels Distillery. Find everything you need to plan your route at jacktrail.com.

Roaring Forties Press has published a couple of unique guidebooks for adventurous music fans. Grunge fans who want to make a pilgrimage to Seattle will like Grunge: Seattle by Justin Henderson; the book tells the story of the grunge era and points out places of historical significance throughout the city. Want to see the bars where Green River and Soundgarden played in their early days or the studio where Nirvana made their last recordings? The maps and info here will get you to about 30 sites.

Jimi Hendrix: London by William Saunders offers a similar experience for fans of the late guitar god; follow the stories and the map to find some of Jimi’s preferred hangouts like one of the apartments he lived in, Ringo Starr’s old house, the infamous Ronnie Scott’s nightclub and a place with the tantalizing moniker World Psychedelic Centre. A guidebook about Bob Dylan is the next in the series.

50th Anniversary of the Berlin Wall

Building of the infamous Berlin Wall began in August of 1961 and the city of Berlin has many special events planned this year to commemorate the 50th anniversary of the Cold War bulwark that for 28 years separated Soviet-dominated East Berlin from the west and freedom. An extensive photo exhibit will run through early October at the German Historical Museum and a “Wall Images” art installation will be in place all along the trail of the wall; that exhibit will feature oversized photographs showing what each particular spot looked like on either side of the wall in 1961. Roger Waters will perform Pink Floyd’s The Wall at the O2 Arena on June 15 and 16, and a memorial for victims of the Berlin Wall will be held on Aug. 13. The Berlin Wall was torn down in 1989 and very little evidence of the actual wall remains today. visitberlin.com

“The app thrills the tour guide in me,” says Steves. “The combination of hearing about the art as you see it heightens your ability to really appreciate it. It all sinks in more deeply and fluidly than the disconnectedness of the experience when your eyes jump back and forth from book to masterpiece again and again. It frees you up to maximize your focus and be in the artistic moment.”

The free app can potentially save the traveler hundreds of dollars in guided tour expenses. ricksteves.com

The second season of the music-oriented travelogue Music Voyager has arrived. The first three episodes this year are filmed in Louisiana and feature music from Galactic, Kenny Wayne Shepherd, Kermit Ruffins and others. Six episodes from Colombia follow featuring Aterciopelados, Systema Solar, Joe Arroyo, Bomba Estereo and more. In the L.A. area Music Voyager is viewable on KCET and KLCS.