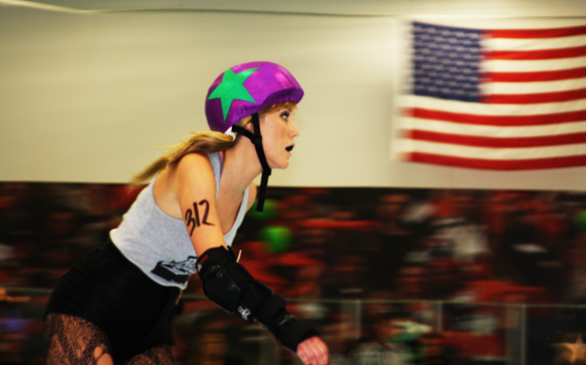 For the Angel City Derby Girls, derby is everything and real life is just what pays the bills. This women’s roller derby league has been recruiting and reforming girls not only into a new kind of sport, but also into a family.

“It’s mostly girls who were once outsiders, or who didn’t always belong,” says coach Rachel Rotten.

“We don’t turn anyone away, no matter their age or their physical abilities. If they can hack it, they’re in,” adds recruiting coach Shanks.

Derby rules are set down by the Women’s Flat Track Derby Association (WFTDA), which regulates all roller derby leagues in the nation. Two teams consisting of five skaters each compete, earning points every time their team’s “Jammer” (a skater designated by a helmet cover with a large star on it) passes the opposite team’s “blockers.” The blockers want to prevent the opposing Jammer from passing the crowd of skaters, while letting their own Jammer through. Derby is a full-contact sport, and blockers are free to hip-check their opponents, pop them in the chest or the shoulder, or any number of strategies in order to keep them from breaching their human wall of skaters.

Derby is most remarkable for the incredible sense of camaraderie it fosters between teammates.

“When I first started, my confidence was on the ground,” says Shanks, who balances derby between a job and a full load of classes at Pasadena City College. “These girls just lift you right up.”

At Angel City, girls can find support and friendship in addition to a newfound athleticism.

“Once you get past the bullshit of life, it’s nice that someone’s got your back. When shit starts blowin’ up, you have 70 women who won’t judge you, who say ‘Hey, we get it,’” says Babyface Nellie.

Dominated by women, roller derby has been an emerging sport in the past 10 years, with roots dating back to 1885. Marathon races were popular during the Depression; one famously held at Madison Square Garden was the equivalent distance from Los Angeles to New York around a rink. It grew to popularity and evolved into a sport with unique rules in the ’40s, but had faded by the ’70s. In 2002, a group of women in Austin began a revival when they wanted to start an all-girl team, catalyzing other females to start their own leagues as well.

Derby girls go by their skater names, both on and off the track. These aliases give the sport a sense of humor and are often either a play on the player’s real name or a unique element of their personality.

Other players have been christened by their teammates in the last minutes of a pre-tournament car ride, like Breakfast whose number is 8am.

Skater names compliment typical skater attire, which usually consists of knee high socks, tights, short-shorts, and a shirt bearing the skater’s alias and number. Derby-style is tinged with punk, shown in the duct tape, rips and tears in tights and tops.

“It’s a sport where women look like women,” says Rotten. “In the Women’s National Basketball Association, the women basically dress like men, and people will still see a men’s basketball game before they see a women’s game.”

The Angel City Derby Girls have a training system they require their novices to pass through before they can make the A or B teams. The first thing a skater learns in Fresh Meat, Angel City’s new-recruit team, is how to fall. Falling is inevitable and skaters have to be able to do it at a certain speed.

“If you can fall correctly, you just take a knee and pop right back up rather than falling behind and becoming a liability to your team, “ says coach Rotten.

After the first six to eight weeks of Fresh Meat, skaters move on to Round II: Cosmos, where they learn Derby 101 and fundamentals.

“It doesn’t make any sense for the first two months,” says Rotten.

Once the girls are sufficiently comfortable on their skates, they must pass an assessment, skating 25 laps around the rink in five minutes, in order to be eligible to be placed on the team.