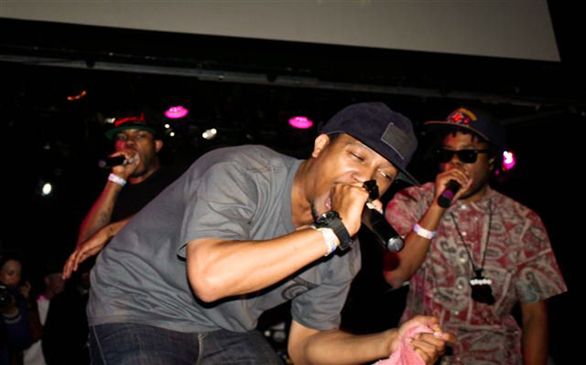 Extensive cross-country tours can eventually turn into routines for performing artists. Arrive in a new city, run through sound check, hang out backstage, rock the show, hit the after party, get on the tour bus and repeat. There are particular tour dates, though, that can capture the artists’ attention and motivate them to give their best performances: the hometown show. April 7 at the Key Club, Los Angeles bred hip-hop trio, Pac Div, owned the home stage and spotlight.

The group was on the sixth stop of the Grind N’ Hustle Tour with Young Dro, Killer Mike and Dee-1. Previously they were on their Underdogs Tour and doing various shows all over the country, so this was Pac Div’s first concert in Los Angeles in over a year, and expectations were high.

As the venue’s lights dimmed, signaling the start of Pac Div’s set, the piano intro to “The Mirror” began, igniting the anticipation. “Los Angeles, y’all ready?” asked the voice of Like. The raucous crowd responded with a boisterous roar. Like, Mibbs, and BeYoung then stormed the stage, and chaos ensued.

Pac Div started with songs from their newest mixtape Mania!, such as “Take Me High,” “Chief Rocka” and “Anti-Freeze,” and fans recited the lyrics word for word. All three members fed off the extreme love and energy, frenetically bouncing around stage and frequently interacting with the “knuckleheads,” their nickname for their fans.

Pac Div also performed selections from Church League Champion, like the popular “Mayor,” which drew one of the biggest responses of the night.

It was an energetic and raw hip-hop show, and the crowd was in full support their homegrown talent. For a group who has always claimed to be the underdogs, Pac Div seemed like the favorites that night. Home sweet home.