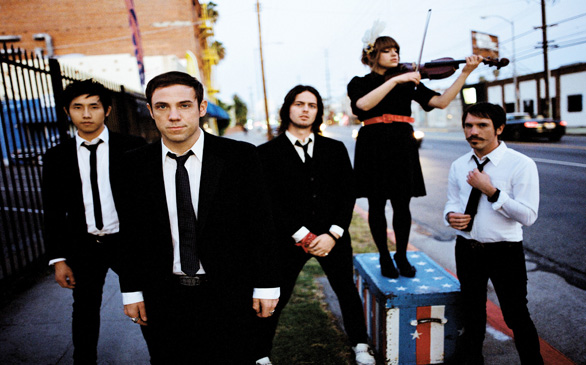 In the middle of a huge five-city tour that will go everywhere from London to Los Angeles, the Airborne Toxic Event is gearing up again to get back into the music world. After the band’s 2008 self-titled debut, which included their successful, heart-wrenching track “Sometime Around Midnight,” the band has made it onto radio stations and TV networks around the world. Airborne Toxic Event has made a name for itself with genuine lyricism and melancholy sounds that include everything from drumbeats to violin notes.

All at Once, the band’s upcoming album, and the band’s current tour show its growth from a struggling, independent band to a full-fledged worldwide-loved musical phenomenon. Now back with this new album, the band’s upcoming tour shows the Airborne Toxic event is not pulling any stops when it comes to playing sets and sharing its music. The band has come a long way since their self-titled debut album, which the Boston Herald called “Debut Album of the Year.”

“We didn’t have a label for a really long time. We basically toured … we played 350-something shows to support our first record. It was mostly a word-of-mouth thing,” says Mikel Jollett, lead singer of Airborne Toxic Event

In fact, Jollett admits that he was shocked to learn that so many people bought tickets so quickly to the band’s upcoming shows. Despite all the attention and fame, however, Jollett stresses the very personal and genuine energy that goes into the band’s albums and performances.

For Jollett, there is a lot to be said about the connection between songwriting and reaching out to any and all fans who hear the Airborne Toxic Event’s music. Jollett wrote about 50 songs for the new album, making sure that the tracks included carry a distinct meaning and purpose. For him, there is a strong connection that can be found between utter strangers when listening to a song, even if this connection stems from seemingly negative situations. Recognizing that someone else feels the same way you do is one of the most important moments in music.

“I think writing has a lot to do with loneliness,” says Jollett. “You write because you’re overwhelmed by an idea … Something about taking it to the page and sharing it with other people makes it less overwhelming to you.”

All at Once boasts some of the same themes from their debut, but their continued growth as a band makes it a different album when it comes to sounds.

“We had a whole year to make it. There’s multiple genres happening at the same time: folk music, rock ’n’ roll, classical music and electronic music. We weren’t sure if anyone was going to hear the first album. We made it at a friend’s house. This one had a real producer. We knew people were going to hear it. We wanted to have something to say,” says Jollett.

He also comments on the fact that the shows are now bigger and louder when it comes to audience members. For him, though, the key to any live show is focusing on the energy of the song and remembering why he wrote it. L.A. fans, however, should expect quite a show if they attend an Airborne Toxic Event concert.

“Just complete madness,” Jollett jokes when talking about the nature of L.A. shows. “Andy Warhol said something as opposed to nothing has to happen.” The moment when you are surprised by something and you realize something just happened to you, not just in front of you … I want that to be every one of our shows.”

If you’ve never heard the band, rest assured that their sound is far from ordinary. And the upcoming concerts are more than profit-making shows for Jollett and company.

“It’s not something we take lightly because people trust us to makes music that informs their lives. That’s what we do,” Jollett says.

For now, the current tour is proof enough that the band will continue to flourish in the current musical scene. There are always tough issues to deal with, but the Airborne Toxic Event’s music goes to show that everyone’s got problems and everyone can sing along to Jollett’s voice and get through them.

All at Once will be available April 26. The Airborne Toxic Event perform April 25 at the Satellite, April 26 at the Troubadour, April 27 at the El Rey, April 28 at the Music Box and April 29 at Ford Amphitheatre. For more information, visit theairbornetoxicevent.com.