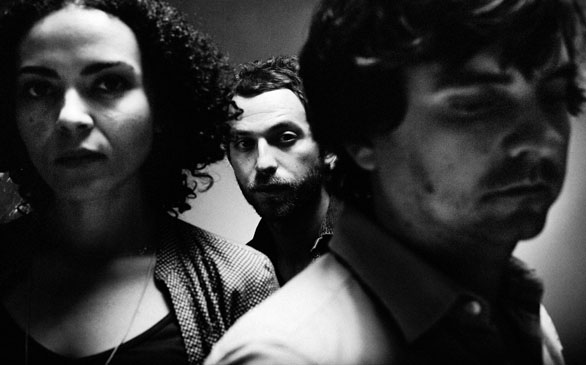 Indie rock band Eastern Conference Champions have been on the creative offense within the past year preparing for its forthcoming album, Speak-ahh. Formed in the City of Brotherly Love, the three-piece act consisting of Greg Lyons, Joshua Ostrander and Melissa Dougherty now resides in Los Angeles, creating a stir across local clubs and residencies. Their Americana ballads and soothing folk melodies earned them a spot on the Twilight Eclipse soundtrack, which was nominated for a Grammy.

Recording for Speak-ahh began last winter in Los Angeles, revealing a different approach from their debut release from nearly four years ago.

“I feel like we took risks with a couple songs and stepped out of our comfort zone,” shares lead singer Ostrander. “There is a song in the record called ‘Bull in the Wild’ which I think is the biggest project to date for us. When people hear it, they’ll know it’s not from the epicenter of what we normally do. We have a few songs on there that are five-minutes long, and we’ve been embracing the freedom without a label.”

Expanding towards a different direction, the album reveals a raw and daring approach as they depart from their previous sound.

“A lot of the lyrics in this album are about growing up in the suburbs of Philadelphia and fighting to get out of there,” continues Ostrander. “Musically we’ve been doing whatever we want.”

Their musical approach is a combined effort and a mutual collaboration within the group. Constantly trying to reinvent themselves creatively, they channel their aesthetic sound at every attempt.

“We try to keep our music very clean and tight within the band so the ideas remain fresh,” shares Ostrander. “We’re not really listening to new stuff because we don’t want to be influenced by something we heard on the radio, hopefully we create something unique and original.”

The song “A Million Miles an Hour” off the Eclipse soundtrack deliberately expresses their creative agenda and spontaneity. Having created a demo within a few hours, they earned the coveted spot from a list containing 400 other artists.

“They let us know what they were looking for, we knew they wanted a bass intro and slow BPMs” states Ostrander. “Instantly it was a challenge because it wasn’t something we would do normally, but it became really rewarding once we got it. We learned that we could be put in any situation and shine. Normally they hear a song off our LP, or EP, and it becomes our decision if we want to let them use it, but they wanted a specific song and luckily we delivered on it. We’re really proud.”

On the current spring tour, ECC has been debuting new material while playing close attention to crowd responses. As of late, they have focused on creating music that can be enjoyed live while transcending a personal bond on the album.

“We have two songs we’re currently excited about called ‘Hell or High Water’ and ‘Attica,’” says Ostrander. “When we recorded ‘Hell or High Water’ we knew it was a big song for us. But then trying to pull it off live we didn’t know how it was going to work. I think fans will understand when they hear it. But I think it’ll sound really good in front of a live crowd, I can’t wait to go out and play it at shows.“

Parting ways from a record label usually spells disaster for many artists. When ECC stepped away from Geffen, they independently released two EPs while producing, mixing and creating the album artwork themselves.

“Being independent gives us the freedom to do whatever we want and as an artist that’s great,” adds Ostrander. “If we were signed to a label, our last EP would have taken months to release, instead we recorded a few acoustic songs and really quickly released something. We love being in this position.”