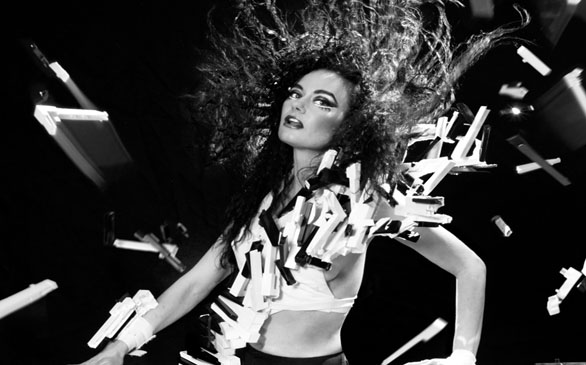 With her new EP titled V the Volcanic, it’s tempting to say that Kristeen Young is “hot as lava” as her career “erupts.” The new music does actually mark a turning point for Young, who says she wasn’t feeling the greatest after her 2009 breakthrough, Music For Strippers, Hookers, and the Odd On-Looker.

“I was going through a particularly dank depression,” Young reveals. “I didn’t want to be me so I decided to use what was killing my time and become other people.”

Those other people turned out to be characters in movies as Young found inspiration for the EP’s seven songs in the likes of Old Lodge Skins from Little Big Man, Cleopatra from the film of the same name and even the android Pris from Blade Runner. The lyrical variety caused Young in turn to push herself beyond what she had initially imagined V the Volcanic to be stylistically.

“I started branching out into other styles a bit: opera, dark wave and other sounds that felt cozy to me.”

V the Volcanic drops on April 26, and Young shows off her four-octave vocal range during a four-week Monday night residency at the Hotel Café beginning May 2.

Are You the King of the Blues?

Guitar Center’s annual unsigned artist discovery program for blues guitarists is underway. Interested guitarists need to sign up for the competition at a Guitar Center location of their choice if they want a chance at taking home a share of $50,000 in prizes. Among the goodies that the grand prize winner will get: $25,000 in cash, a studio session with Grammy Award-winning producer Pete Anderson, a Vintage Collector’s Series Les Paul guitar, an Egnater amp and full stack, an effects processor and pedals, a feature in Guitar World magazine and endorsement deals from Gibson, Ernie Ball, Boss and Egnater. Each entrant is required to play a live solo to their choice of Guitar Center-chosen backing tracks. Tracks are available for free download now at guitarcenter.com/kingoftheblues; local play-offs begin May 5.

In conjunction with their third birthday, Seattle-based imprint Tsurumi Records is offering a free download of a 10-song sampler. The complimentary compilation features tracks from garage punks the Beautiful Mothers, lo-fi rockers the Second Academy, Tokyo-based noise act Golden and new music from the latest Tsurumi signing, Fonzarelli. Downloads of The Tsurumi Sampler are available through May 11, which also happens to be the day that Fonzarelli’s Last Chance Summer Dance album drops. tsurumirecords.com

This Or the Apocalypse’s Grant McFarland and MEINL Cymbals have announced a video contest for drummers. Contestants need to download a special “click track” version of the This Or the Apocalypse song “Toro” from meinldrumcontest.com, make a video of themselves playing along to the track and then upload it to the same site.

The judges (McFarland and Lamb of God’s Chris Adler) will be looking for accurate and faithful replication of the song’s drum part. Contestants have until July 31 to upload their entry for a chance at winning a set-up of MEINL’s new Classics Custom Series cymbals.

Having already captivated music fans with her live and recorded work with Owl City, singer-songwriter Breanne Duren is stepping out on her own with a debut EP entitled Sparks. Duren says she began sketching out ideas for the songs on Sparks while she was on tour with Owl City’s Adam Young.

“I’d hum melodies while walking around the airport, write lyrics in my bunk on the bus or dance to the rhythms playing in my head while getting ready for a show,” says Duren. “I find the environment on tour to be very inspiring as every day revolves around music and performance. Also, constantly experiencing new places and meeting new people really fuels the creative fire.”

Sparks drops on May 3, and Duren plays the Hotel Café May 12.

Warner Bros. hip-hop artist Outasight is offering his five-song EP, Figure 8, for free download via Facebook in exchange for an e-mail address. Get your freebie beginning April 25 or buy a copy beginning April 26.