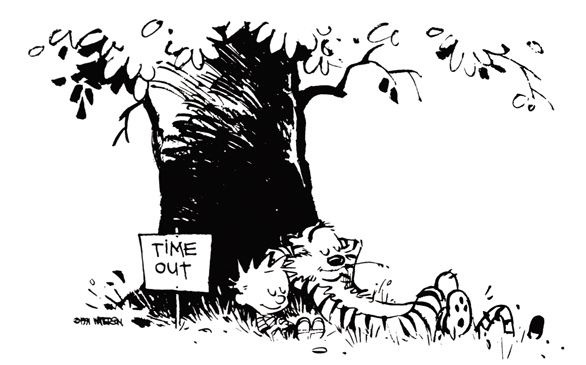 A Well-Deserved Rest – Calvin and Hobbes illustration by Bill Watterson.
(Credit: The Comics: The Complete Collection By Brian Walker, Published by Abrams ComicArts.)

Fulfilling a fantasy you may not have realized you even had, Are You Going to Kiss Me Now? (available May 1) maroons a normal American teen with five celebrities off the coast of Madagascar. Sloane Tanen keeps it breezy and fun while having her way with the cult of fame.

Perhaps my favorite film of this century, Winter’s Bone, based on the novel by Daniel Woodrell, piqued my interest in his other work. Three of the author’s works have been brought together in The Bayou Trilogy (available April 28) and burst with a deeply regional vibe of the South.

Chock full of all the best tales by which to dream, The Big Book of Adventure Stories (edited by Otto Penzler, available May 31) includes the work of Rudyard Kipling, Jack London and O. Henry. Let this tome transport you to a lost childhood that may only exist in fantasy.

The tried and true combination of English estates and unsolved mysteries comes together in Kate Morton’s The House at Riverton. This tale, with expert pacing and absorbing characters keeps you glued to the page.

Whether it’s Elvis Presley or Justin Bieber, every generation of girls finds a boy toy to fixate on. Allison Pearson’s I Think I Love You takes this gestalt one step further when her main character, wracked by middle-age disappointments, finally gets a chance to face her idol.

Crackerjack and elegiac, a winning combination, Cara Hoffman’s So Much Pretty threatens to keep you up until dawn turning pages. The intertwined tales of a missing woman, an intrepid reporter and an unusual teenager mix perfectly in this first novel.

Kate Atkinson’s Started Early, Took My Dog continues the downward spiral that is Jackson Brodie’s sad excuse for a life as the, now former, private investigator finds himself again uncovering deep, dark secrets from the past. Fans of the series that begin with Case Histories won’t be able to put this one down.

Perhaps the most lauded novel of the year thus far, Swamplandia! (by first-timer Karen Russell) recounts the outlandish story of the Bigtree family and their alligator park. Twisty and surprising, Ava’s journey to hell and back feels simultaneously old and new.

The trend that keeps on trending, the cult of Jane Austen, successfully gels in Cathleen Schine’s The Three Weissmanns of Westport. This simultaneous ode and riff on Sense and Sensibility satisfies from start to finish

Famous for her terrific blog, Orangette, Molly Wizenberg expands her thoughts into book form with A Homeade Life. Bursting with anecdotes, recipes and food facts, this little tome is both indelible and delicious.

The dark side of the freewheeling hippie lifestyle gets explored to perfection in This Life Is in Your Hands. Melissa Coleman’s touching memoir recounts her idealistic family undone by the tragic death of her sister.

Blood, Bones & Butter, grabs you by the balls and holds on tight. Like Ruth Reichl before her, Gabrielle Hamilton writes about food and self with a depth and emotion that transcends this increasingly crowded genre.

Art Workers: Radical Practice in the Vietnam War Era, by Julia Bryan-Wilson marries scholarship with human interest. The first book to cover “art workers,” fascinates by putting a spotlight on an overlooked but influential group of people.

Warm and fascinating, Tony Fitzjohn’s Born Wild recounts the author’s enthralling adventures in Africa, including returning more than 40 lions and leopards to their natural habitat.

Conspiracy theorists tend to veer either hard right or hard left, depending on who’s being blamed in the scenario. J. Wayne’s Conspiracy in the Heartland takes the former tack, blaming “the witches of the Left Coast,” among others for breaking the American spirit.

If you’re craving a little substance in your life, Enduring Violence: Ladina Women’s Lives in Guatemala will fill you right up. Cecilia Menjívar’s in-depth account of politics, gender and suffering shines a light on an underexposed topic.

Astonishingly riveting, The Immortal Life of Henrietta Lacks, by Rebecca Skloot recounts the true story of a poor black tobacco farmer whose cells end up becoming infamous in the world of science. An unwitting donor, Lacks’ contribution becomes an integral component in such groundbreaking medical breakthroughs as gene mapping and the polio vaccine.

For lovers of The Orchid Thief (also known for being turned into the film Adaptation), a new tale of smuggling exotica gets told to perfection in Jennie Erin Smith’s Stolen World. This time, reptiles take center stage with the quirky and improbably named Hank Molt leading the charge.

Marjorie Garber’s The Use and Abuse of Literature, an elegant treatise on why books still matter, painstakingly argues for loyalty to the Canon, in this increasingly digital age.

After reading the brilliant Zeitoun, I couldn’t wait to have a go at Dave Eggers’ What is the What. This tale of one of the Lost Boys of Sudan reads lightening quick while wringing your heart dry.

For funnies junkies or anyone with a good sense of humor, The Comics: The Complete Collection by cartoonist and historian Brian Walker gives the gift of giggles laying out the history of American newspaper comics – rare original art included.

The seemingly inexhaustible supply of never-before-seen memorobilia regarding arguably Hollywood’s brightest star gets another go with MM-Personal: From the Private Archives of Marilyn Monroe. This lavish enterprise, by Lois Banner and Mark Anderson, features photos, personal correspondence and even a recipe for bouillabaisse.

Funny and smart, Mike Sacks’ Your Wildest Dreams Within Reason sports wildly laudatory blurbs from the likes of David Sedaris, Paul Feig (“Freaks & Geeks”) and Jack Handey. Be prepared to laugh out loud.