There Will Be Blood...and Singing 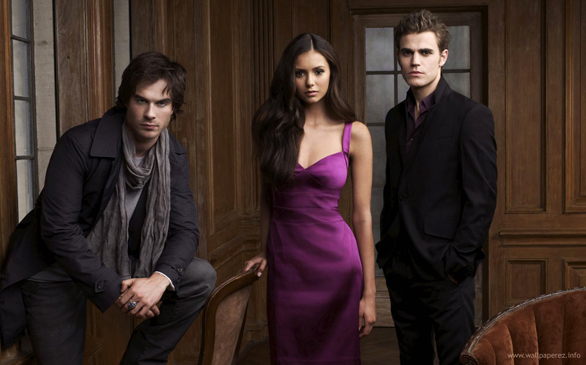 Get the lowdown on Damon, Elena and Stefan before “The Vampire Diaries” Season 2 comes to a close.
(Credit: The CW)

As “The Vampire Diaries” and “Glee” near their second season finales, we have to ask: Where the hell is Klaus, and what’s going to happen at Nationals?

For those of you who have been dying for some fresh blood – er, episodes – of what I consider to be television’s best primetime soap, wait no more. Now that April has arrived in full bloom, “VD fans” everywhere can rejoice over the return of the CW’s highly addictive drama. After that juicy April 7 episode (“Know Thy Enemy”), let’s focus on where everyone’s at, what’s going on, where executive producer Kevin Williamson is planning to take us … and how many more Ford Fiesta product placements we’ll have to sit through.

Ready? Try to keep up…

Elena, Stefan & Damon – The hot blood-drinkin’ brothers planned to watch over Elena and protect her from the evil Klaus now that word has gotten out that she’s the doppelgänger. Meanwhile, Elena became the recipient of a fancy scholarship, but nasty Catherine interrupted the ceremony, cutting the celebration short – by killing John (E’s biological dad)!

Isobel & Catherine – These undead BFFs reunited and did some much-needed catching up. Isobel told Catherine that Klaus won’t kill her (Cat) unless he gets the moonstone and the doppelgänger (Elena). Turns out it was just a trick: Once Catherine found the moonstone (in a bowl of soap bars!) Isobel ditched her to kidnap Elena, leaving Klaus’s henchman to move in on the real target, Catherine. But there was another twist: Isobel was only protecting Elena because she was compelled by Klaus to do so. After a touching moment between mother and daughter, Isobel took off her protective ring and set herself on fire in the sunlight – in front of Elena.

Caroline & Matt – After finding out that Caroline is a vamp and that his sister, Vicky, was really murdered, Matt ran off (Who could blame him?) and tried to make sense of it all. Caroline cried and asked for his forgiveness, but in the end Matt wanted one thing: for her to wipe his memory of the truth (just like she did with her mom, the sheriff). She reluctantly does it, but it looks like it didn’t work because … Cut to: Matt getting in a car with Caroline’s mom – they still remember everything!

Bonnie & Jeremy – After some intense sexual tension, these two finally hooked up, and now Elena’s younger brother is pretty much a loyal sidekick for Mystic Falls’ resident witch whenever she’s got a séance to hold or a spell to cast. (Need a candle lit? Jeremy’s your guy.) After making some books fly off a shelf, Bonnie found a spell that harnessed the power of a bunch of dead witches that can be used against the super-evil Klaus. The only catch: She could die trying to use it, and you know Jeremy will have none of that.

Jenna & Alaric – “Auntie Vanilla” packed her bags and ran out on Alaric after finding out Isobel was very much “alive.” Alaric was then abducted by one of Isobel’s lackeys – and then turned into Klaus via some kind of possession ritual – creepy alert!

“The Vampire Diaries” airs Thursdays at 8 p.m. on the CW.

Meanwhile, over at McKinley High, America’s favorite glee club has much to look forward to – prom, Nationals, summer vacation – as they near the end of another year of surprises, secrets and scintillating songs (Sorry, Gleeks, looks like that highly anticipated Anne Hathaway episode won’t happen ’til Season 3.). But rumor has it that some of the boys are doing their own version of “Friday,” the Rebecca Black YouTube sensation, in the super-sized April 26 prom episode titled “Born This Way.” Yep, they’re bringing Gaga back, and I can’t think of a better anthem for the kids of New Directions.

Where we left off…

Will & Emma – Will wooed substitute Holly Holliday (Gwyneth Paltrow) and got the kids to write original songs to perform at Regionals – and win! Meanwhile, Emma let it slip that she’s been confused by the apparent feelings she still has for Will, sending hubby Dr. Carl (John Stamos) away.

Finn & Rachel & Quinn – Quinn pretended to be friends with Rachel in order to hide the fact that she and Finn were back together. Once the truth came out, Rachel poured her heart and soul into an original song (the power ballad “Get it Right”), and everyone voted her Regionals MVP.

Santana & Brittany – After opening herself up to Brittany and then being turned down, Santana shunned Brit’s friendship and chose to fake her way through her relationship with the clueless and “trouty-mouthed” Sam.

Kurt & Blaine – After the Warblers mascot passed away, Blaine saw another side of Kurt and realized that he was the One. The two shared a kiss (finally) before going on stage to perform a duet … and a kickass rendition of Pink’s “Raise Your Glass.”

Sue Sylvester – After taking on the role of Aural Intensity’s coach, Sue attempted to bring down New Directions yet again by pandering to the judges at Regionals – and failing. Cut to: Sue punching out the announcer on stage and storming off. I can only imagine that World War Sue has only just begun.