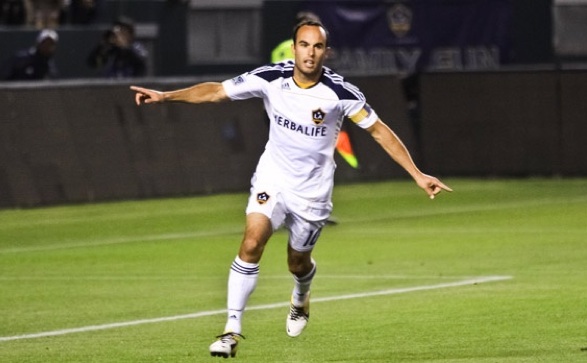 Landon Donovan scored his first goals of the season.
(Credit: Robert Mora/LA Galaxy)
Fresh from rest, Landon Donovan returned to the Galaxy Saturday night and scored twice to propel the squad to a 3-0 win over the Portland Timbers before over 23,000 fans. “He played well. He’s obviously been out a little over two weeks. It was good to get him in for 65 minutes,” head coach Bruce Arena says during a postgame press conference. “I thought in the first half he played quite well. I think Landon should be scoring goals, so it’s good to get him on the board here and hopefully, there is more to come.” With the win, Los Angeles improve to 4-1-3 with 15 total points in the Western Conference. However, they are the only team to have played eight games into the season thus far.

“It was certainly a good win for our team,” Arena adds. “Hopefully, we continue to move forward as a team.”

Forward Chad Barrett began the scoring early in the first half with his second goal of the year. Barrett received a brilliant one-touched pass from Donovan before firing a bullet past Timber goalkeeper Troy Perkins in the fourth minute. Both Donovan and midfielder David Beckham received an assist each.

“I didn’t think twice about taking that shot. That’s what you need to do if you want to constantly score goals,” Barrett says.

The goal production did not stop there, as Donovan followed with a penalty score four minutes later. Donovan then added a beautiful scoring header in the 67th minute of the second half after Colombian striker Juan Pablo Angel’s individual efforts inside the box led to a deadly looped pass. It was Donovan first and second goals of this campaign.

“I could care less about scoring,” he confesses to reporters. “I want to win. I’m not as much as a scorer anymore.”

Los Angeles goes on the road next, traveling to FC Dallas for a showdown on Sunday, May 1, at 4 p.m.