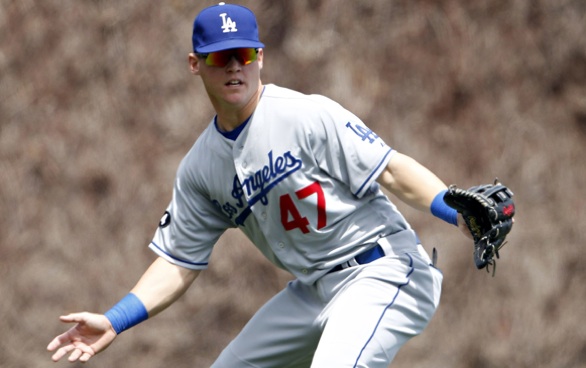 Dodger newcomer Jerry Sands showed great promise defensively against the Cubs.
(Credit: Brian Cassella/Chicago Tribune/MCT)
Winning the final game of the three-game series in Chicago, the Los Angeles Dodgers claimed the road set with strong starting pitching. Right-hander Hiroki Kuroda tossed a solid outing a day after left-hander Ted Lilly had a shaky start in his return to his prior team and city. Kuroda knew he had to deliver significant time from the mound, and he did by pitching 6.2 innings, allowing two earned runs on nine hits while fanning seven Cub batters and walking none. Kuroda is now 3-2 for the year with an ERA of 3.21.

“I had really good movement on the splitter today,” Kuroda says. “With five runs of support, I felt responsible for winning this game.”

Relievers Mike MacDougal, Blake Hawksworth and Jonathan Broxton shutdown Chicago thereafter for the Dodgers’ 7-3 victory that moved them to one game above .500 at 12-11.

“It’s about going up there and executing and being confident,” Ethier states. “It’s nice knowing I don’t have to do too much with guys in front of me and behind me doing their jobs and picking me up. It makes my job a lot easier.”

Although the Dodgers left 16 runners on base, they managed to plate seven runs. In the first game of the series, they scored 12 runs before grabbing eight in the second game (which they should have easily won).

Los Angeles continues its six-game road swing with three games in Miami against the Marlins, beginning Monday, April 25 at 4 p.m.