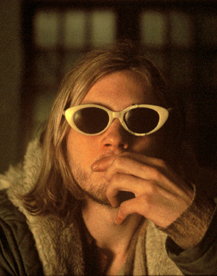 The tried-and-true formula behind the success of so many – if not all – feature films inevitably involves the use of a beginning, middle and an end. Or, in more cinematic terms: the setup, conflict and resolution. In Last Days, renowned director Gus Van Sant renounces the idea of structure and story, preferring instead to let the cameras follow his central character, Blake, as he meanders through his home, the backwoods and the adjacent shed for an almost dialogue-free 97 minutes.

Inspired by the final days leading up to rock star Kurt Cobain’s suicide in 1994, the film does little to contextualize the "inner turmoil" of the subject’s struggle with depression and suicide. It seems that dialogue and words are considered overrated; the only sounds Blake exudes are grunts.

Yes, indeed, there is a lot of grunting. So much so that the only thing the viewer may learn is that Blake is not a man of many words. Or is it that he’s simply fed up with English as his primary form of communication? Well, considering that Last Days is described as a "film designed for individual interpretation," it may very well be that the final analysis is left to the viewer – if one cares to over-analyze the weak characters and non-existent story line to the point of extracting meaning.

On a different note, Michael Pitt evokes the image of Kurt Cobain almost perfectly on a physical level, from the late rocker’s soft facial features to his frail, slouchy stature. Surely, Pitt would have loved to use his uncanny resemblance to play the enigmatic musician that was Cobain, in a film that sought to illustrate his confrontation with the demons of success and his struggle in choosing death over life. In another movie, maybe … and certainly within another story line.