Madea's Big Happy Family: The pistol-packin' grandma is back by popular demand. 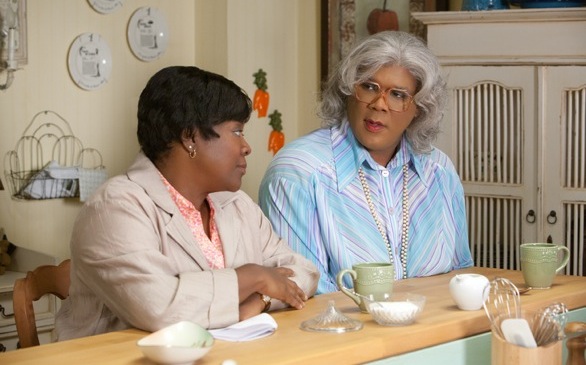 “All that make-up and costume while I am directing is a lot, but audiences wanted more, so I sucked it up and gave it to them,” says the screenwriter, director, actor and producer, who initially introduced the sassy grandmother, Mabel “Madea” Simmons on the big screen in the movie Diary of a Mad Black Woman.

Since her screen debut in 2005, the comedic, fictional character played by Perry has been a cornerstone star of Perry’s ever-expanding gallery of characters and remains one of the primary reasons for the filmmaker’s popularity.

“She’s not politically correct,” says Perry about everyone’s favorite wisecracking grandma. “Don’t ask her if you don’t want to know the plain, honest truth, because she doesn’t give a damn. I think that’s why people enjoy her so much. Her energy is contagious, and everybody from a certain generation knew this grandmother.”

In Madea’s Big Happy Family, Madea is tasked with uniting an estranged family. This time, she’s joined by her wacky cousin Aunt Bam (Cassi Davis), a trash talking, pot smoking, plus-sized woman with a wild side.

“She’s a wildcat and a wildcard,” affirms Perry, who needed a little comic relief after helming two serious dramatic projects back to back.

“After For Colored Girls and Why Did I Get Married Too?, I just wanted to have some fun and really enjoy myself,” he explains on his decision to make another movie based around the rambunctious matriarch.

“People always ask me where my stories come from, and some of the scenes in the movie did actually happen. You can’t make that up,” he continues. “It’s being able to have all of those experiences and be around people who are going through all kinds of things.”

Joining the cast in this latest offering is Loretta Devine, who plays Shirley, Madea’s niece and mother of three bickering adult siblings.

“She’s a soft-spoken woman, who relies on prayer as opposed to hard discipline,” shares Devine. “She’s been sick going on seven years, and due to her illness, she hasn’t been able to manage her children very well.”

After Shirley receives distressing news about her health, all she wants to do is gather her children around her and share the news as a family, but her kids – Tammy (Natalie Desselle Reid), Kimberly (Shannon Kane) and Byron (Shad “Bow Wow” Moss) – are all too distracted with their own problems to care. Once again, it’s all up to Madea, with the help of the equally rambunctious Aunt Bam, to gather the clan together amidst all the drama and melodrama.

Perry was particularly excited about the inter-generational drama that resulted with the inclusion of younger cast members.

“When I wrote it,” he says, “I knew that I wanted to have a certain group of people working with me,” he adds on his casting choices. “I wanted a young cast, and I was excited about having Loretta as she is the hardest working actor out there. Having all those different generations represented was very exciting.”

“I love to have young people come into this situation and see how they live and then see how Madea lives,” continues Perry, who in some scenes was directing the cast while dressed in drag.

“I have worked with most of the people, and so my team knows that when I am in costume I am still me. For the new people, it was pretty strange seeing me sitting there with the wig and the costume,” adds Perry who also plays another character – Madea’s brother Joe.

“Comedy is all around me,” continues Perry, “Even in some of the most serious situations, I find something to be joyful about. That’s why my films are the way they are. The audience wants to laugh. They want to have a little drama or melodrama, and with Madea I can do that.”


Madea’s Big Happy Family is currently in theaters.
Article posted on 4/25/2011
This article has been viewed 4133 times.