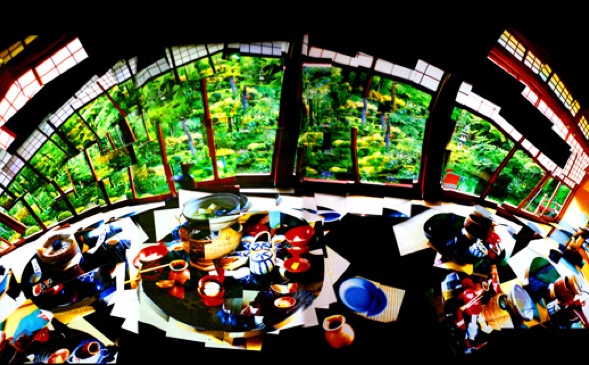 Japan at Rest by Jules White
Coming to a close at the end of the month is an intrinsic L.A. debut made by Christopher Jules White. The rising artist explores the intersections of vivid color, light and form through photo collages and paintings displayed at the Gregory Way Gallery in Beverly Hills.

Painting and creating his individual worldview, White creates a puzzle for the viewer to solve. His play on lighting the numerous colors that we normally do not see are so clearly depicted in his collages he makes them seem natural all the while keeping the essence of his work strictly unique and unusual. The play on the forms of the object and the scenery are broken, only to be recreated in a different form through numerous photos coming together in a collage mounted on a frame. The scenery of a Japanese room and garden titled Japan at Rest and The Typewriter are only two of the amazing collages that focus on the detail, forms and colors of the object and scenery. Despite the rather small gallery, the photo collages suit the resilient space giving off a pleasant silent vibe filled only with colors and the flow of forms.

White was born in Texas and moved to California when he was just 6 months old. His works are found in numerous venues and have been featured on various magazines and books. Surprisingly, such plays on forms and color are made by a person with a PhD in computer science. In some ways, his photo collages are systematic, and there is something tech-y about the world he brings us into.