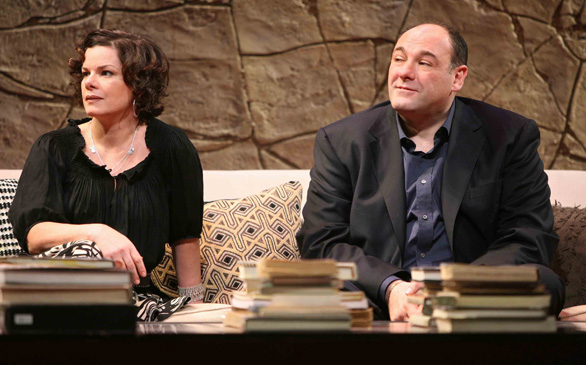 Sometimes it’s funny to witness other people’s misery. Really funny. Such is the case with “God of Carnage.” Two couples are sitting face to face in a living room discussing a prickly situation that happened between their two 11-year-old sons. One boy hit the other, knocking out two teeth and causing possible nerve damage, and the parents are trying to settle the matter like civilized adults. This is where the fun – and funny – begins. We see two mature couples who look as though they seek an amicable resolution, yet as time goes by the individuals, and couples unravel and composure flies out the window.

Marcia Gay Harden is the most hilarious of them all, playing the mother of the injured boy. Though she sees herself as the primary peacemaker, the slight perfectionist comes across as a judgmental goody two-shoes with a hidden anger streak. James Gandolfini plays her husband, who seems to be on her same page but soon shows his true colors, with hints of Tony Soprano.

Jeff Daniels portrays the father of the “savage” boy, a lawyer who cannot stop talking rudely on his cell phone about a possible scandal at his client pharmaceutical company that has all ears within listening range tuned in. Last, Hope Davis plays his wife, a neurotic “phony” who slowly but surely becomes more comfortable speaking her mind.

The interplay between all four is witty, painfully realistic and often slapstick. The physical humor, which you might not expect from these fine thespians, adds an accesible, down-to-earth element to the show, and the actors’ timing is impeccable.

Los Angeles has been waiting anxiously for the arrival of this New York hit, even Brad and Angelina were present on opening night. Angelenos are in for a theatrical treat with “God of Carnage.”