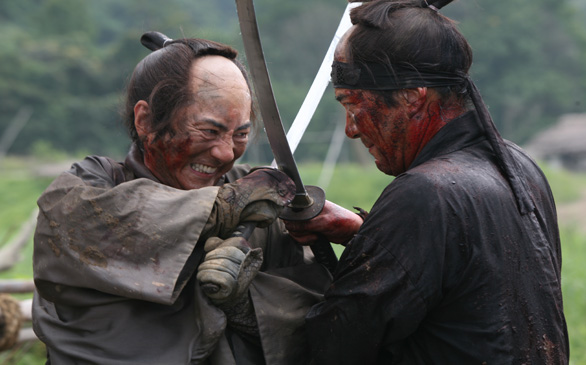 The art of making film began simply for Takashi Miike as a way to circumvent adulthood. After 30 years, some 50 films, numerous videos, TV episodes and even a stageplay, Miike is a man of the industry. Now the controversial Japanese director, known for gratuitous violence in his movies, has taken on his country’s colorful past in his new film, 13 Assassins.

Miike describes growing up in Japan as a very different place when he was young. He remembers a more rigid framework in growing up that did not offer much choice.

“When I got out of high school, you only had two choices: You could either go to college, or you had to work and essentially grow up and become an adult,” he says. “Now children have more freedom and options as to what they can do after high school. But for me, in order to escape the situation, I chose a [different] place for me to buy some time so I wouldn’t have to grow up, and I went to a film school.”

Once out of school, Miike found himself still unenthusiastic about joining the workforce.

“So, I joined the world of the film business, and thanks to the last 30 years, and everyone else and to the film business in general, I still haven’t found the need to grow up. I can still be who I am,” he says.

Who Miike is, is a successful filmmaker with an illustrious career under his belt. He has done everything from dramatic to outlandish, savage violent to family oriented. At present, he has just released a samurai movie culminating the strong tradition of Japan’s former age with his own talents.

Japanese stories have a long history of being rich in distinction and character. Many stories are derived from Japan’s bloody roots, centered around a society of warring clans and the individual’s pursuit of position and honor within it. Ancient tales of noble samurai have been passed for centuries and have withstood the test of time, implemented in our modern culture in the form of gunslingers, Jedi knights and anime heroes. The stories, much like the culture that spawned them, are based on a structure of strength, ethics and honor.

In his most recent film, 13 Assassins, Miike tributes Japanese heritage and shows his viewers a perspective of things departed.

“Until 200 years ago, this was the way people lived in Japan. So even to this day, somehow unconsciously our sense of life, death and values must affect us to some level,” says Miike. “For me, in my version of a samurai film, what I wanted to show the most is what’s been lost ... to show people that [during that time] everyone essentially had a purpose for life, and for living and for dying.”

That being said, if you’re a fan of this style of storytelling, 13 Assassins is as hard as Japanese steel. In Miike’s remake of of Eiichi Kudo’s 1963 black-and-white film of the same name set in Japan’s feudal era, a group of idle samurai are enlisted to dispatch a ruthless and fiendish lord to prevent his rise to power. This film is a simple yet bold period action piece. Its sharp historical depiction of the late feudal era is on the point, and the story is inflexibly eloquent.

There’s also an element of dark humor included that is characteristic in Miike’s films, and another of Miike’s trademarks, his visionary use of imaginative violence. Although Miike says that he has never aimed to design such brutality and downbeat indulgence.

“Macabre in general is not my goal ... in a sense as a filmmaker I’m a little envious of people who can make movies that seem to be filled with hope. It’s definitely not something that I set out to do ... it’s just something that naturally happens when I make a movie. Doesn’t life itself possess the same macabre or dark sense of humor?” he says. “We come into this world [through childbirth] through a painful process that is somehow called the miracle. If you want a peaceful life, the harder you try to find that life, the harder it becomes to live and the more violent it gets. The movies I make are a reflection of that ... it’s an honest reflection of what life is presenting”

And there is nothing left to be desired in the province of barbarity here. The movie is laden with plentiful battles, grisly suicides, brutal executions and ends appropriately in a grand bloodbath. To the height of the Japanese samurai tale, Miike’s remake embraces the poetic rhetoric of the venerable warrior culture.

13 Assassins stars accredited actor Koji Yakusho, who plays Shinzaemon Shimada, the war seasoned samurai longing for combat and a noble death. Yakusho is accompanied by Takayuki Yamada (playing Shinzaemon’s nephew), Yusuke Iseya (playing the 13th assassin) and Goro Inagaki (who plays the fiendish Lord Naritsugu Matsudaira), as well as a stellar group of actors who all portray their roles precisely.

The film itself is beautiful, shot on an immense and mountainous open-air set, on location in northern Japan. Tied together with sensational costume design, this film truly brings you back to the Island’s feudal time. The style is fittingly traditional, which is a great thing because too many revisions of classic sagas forego integrity in exchange for trendy gimmickry. 13 Assassins holds steadfast to the warrior’s epic, yet is fashionably updated for the now. It’s as if watching a quintessential black-and-white masterpiece in color.