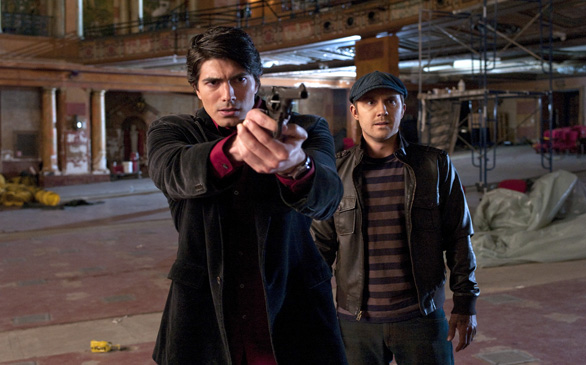 Zombies! Werewolves! Vampires! Dylan Dog: Dead of Night has them all. A film full of monsters, director Kevin Munroe crosses genres to create the supernatural world of a human antihero, played by Brandon Routh, who fights and defends the undead.

The movie is based on an Italian comic book series with 70 million readers worldwide. Unlike many recent adaptations however, Dylan Dog: Dead of Night went for classic, touching upon the aesthetics of Zombie Noir and old detective stories.

Munroe explains this stylistic choice: “I absolutely love it. The believability factor, there’s something that’s just real to it. I love the idea of introducing this style of movie to a new generation who didn’t grow up to see anything like the early monster movies. Movies with only make-up are so foreign right now, but it is another way of making films.”

Dylan Dog: Dead of Night definitely relies more on its storyline than an exhibition of CGI technology, and the two main characters are instrumental to the success of this approach. Routh, the tall and dark-haired star of Superman Returns, takes on the role of another comic-book hero. However, Dylan Dog is certainly not the awkward Clark Kent of the Daily Planet or Superman, defender of the world.

“No pulse? No problem!” is the slogan printed on Dylan Dog’s business card. Dylan Dog is a private investigator of the undead, because well, you know, monsters start trouble sometimes. In this movie, not only are they dangerous to humans, but to each other as well. Dylan Dog comes in as the only human police assigned to keep peace between the zombies, werewolves and vampires – a peace that is essential to maintain the secrecy of the supernatural from the outside world.

After losing his fiancée, Dylan Dog leaves the world of the undead and opts for a career change, investigating husbands with wandering eyes and less gripping cases of insurance fraud. But the mysterious death of a young woman’s father stirs him back into his old ways.

Dylan Dog is sarcastic, even bitter at times, but an inherently nice guy. Routh talks about taking the role of a character loved by comic-book fans, a group whose passion isn’t exactly a stranger to Routh.

“Having played the past characters that I did, I’ve escaped burning at the pyre. With Superman I felt like I could get away with a lesser known—”

Huntington brings a lot of humor to the film in playing Marcus, Dylan Dog’s zany assistant. The animated actor is familiar with the comic book crowd as well, having played Jimmy Olsen in Superman Returns. However, Huntington casually assures that he’s fine and was never really troubled about it. And then he teases his co-star emoting, “I was worried for you at the death. I lost a lot of sleep.”

One of the best parts of Dylan Dog: Dead of Night is the amusing dynamic between Routh and Huntington. Their wisecracking banter in real life proves that this energy is based on the genuine nature of their friendship, which goes back further than Superman Returns as neighbors in an apartment complex.

With Routh and Huntington, the film blends a comedic detective story, a horror full of monsters and an action-packed film. In the end however, Dylan Dog: Dead of Night is still a comic-book movie, a genre that often gets heat among loyal aficionados.

“There are two types of fans. There are the fans who have something and they cherish it and they go ‘I can’t wait to share this with the world and show this cool thing that I found.’ And then we turn to the other fans that you can’t really make a movie for. You have to make movies for the people who want this stuff shared,” says Munroe.

The director then adds, “There are those that you are never going to make happy, and that’s cool. I love that they’re passionate about it. and I’d rather have that than people who go ‘ehh.’”

Passion is not missing in the film, especially not from the director. And combined with Routh and Huntington’s high-spirited execution, Dylan Dog: Dead of Night is not just another comic-book hero movie.