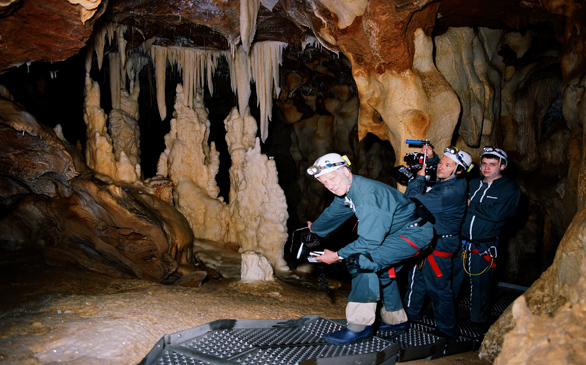 Few, if any, directors have as much passion for how their films are experienced as Werner Herzog. In his documentary Little Dieter Needs to Fly, which he later adapted into the feature Rescue Dawn starring Christian Bale, Herzog isn’t content to have interviews tell the story of a Vietnam vet escaping a POW camp. Instead, the director takes pilot Dieter Dengler back to the jungles of Laos, where he was shot down, and hires locals to take him captive, blindfold him and have him experience again the awful tragedies he faced 30 years earlier. It’s a haunting film, as is Herzog’s Grizzly Man, but both are remarkable representations of the depths a director will go to help his audience fully understand what he wants them to see.

Herzog’s Cave of Forgotten Dreams is much tamer than Little Dieter but still as effective, as it tells the story of the Chauvet Cave, discovered in France in 1994, which has hidden a prehistoric art site the size of a football field for more than 20,000 years. The artwork was preserved pristinely after a fallen rock face sealed the entrance centuries ago, and now, as more of the cave is studied, the scientists offer Herzog a glimpse into how the primitive culture lived. With him, we too discover how they painted, how they used the rolling cavern’s textures to give the figures size and scope, and how they may have added motion by flickering fire near the walls. We can even trace one artist, and his distinct handprint, around the cave to his various works.

Instead, he created equipment to make the walls come alive in stunning 3D and brings his audience the cave as it is meant to be experienced. The rocks jut out at you as you see the shapes and the motion of these prehistoric paintings and attempt to run your hands along the fragile contours. Its beauty is now for the masses.

Cave of Forgotten Dreams is probably 10 minutes too long – those unfamiliar with Herzog might bump this number up to an hour – but any director with his rare opportunity is apt to linger too long on too many shots. Take time to enjoy it the way Herzog does. It’s worth it.