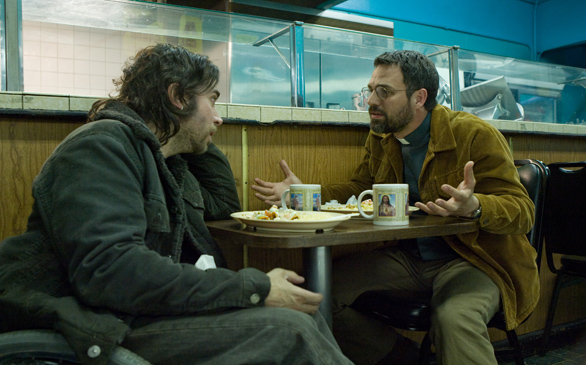 Crossover success can be very tricky; just ask the slew of talented actors who have tried their hand at a singing career only to be met with ridicule and scorn (see: Eddie Murphy, Leonard Nimoy, Val Kilmer). The same is true for actors-turned-director. While some of the most gifted directors currently working in Hollywood are better known for their time in front of the camera (That’s right, Ben Affleck and George Clooney, I’m talking to you.), others haven’t fared as well (again, see: Eddie Murphy). The lesson seems to be that just because you flourish in one creative arena, you might not be as lucky in another. Sadly, that’s something viewers of Mark Ruffalo’s directorial debut, Sympathy for Delicious, might realize all too quickly.

The film follows a newly paralyzed young man (Christopher Thornton, who wrote the script and is a lifelong friend of Ruffalo’s) known by his DJ handle, “Delicious D.” Miserable, desperate and living in his car on Skid Row, he turns to tent revival faith-healing in the hopes that it will restore him, only to discover that he possesses the power to heal others, though not himself. Luckily he still has the power to boogie, which leads him to join a band headlined by the Stain (Orlando Bloom in a brief, showy turn), managed by Nina (Ruffalo’s You Can Count on Me co-star Laura Linney) and featuring Ariel (Juliette Lewis – a rare case of an actor-turned-musician who found deserved success – who shines with her usual spunk, sparkle and ease.).

Ruffalo, who co-stars as well, is an undeniably talented actor whose abilities as a director may well grow with time, but the film’s main problem is Thornton’s script, which can be as preachy as an evangelical sermon and completely unravels as it slides toward a final quarter that’s head-scratchingly misguided. But, hey, at least it’s not Waterworld or Whip It.