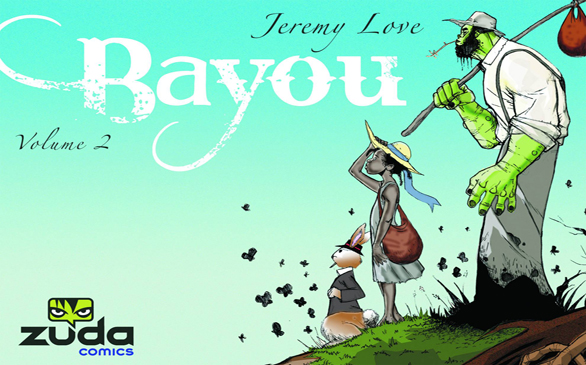 Bayou has been DC’s biggest success story so far with their online imprint, Zuda. The second volume of the award-winning series continues Lee Wagstaff’s journey through creator Jeremy Love’s bizarro anthropomorphic world of New Orleans. Lee is a little girl traveling with a swamp creature named Bayou in search of her missing father who is wanted by a lynch mob. But evil forces are also pursuing her.

This second volume is darker and doesn’t seem to have quite the same magic as the first. The illustrations, which are for the most part top notch, are also somewhat less consistent this time. Still, the early 20th-century South milieu and anthropomorphic creatures are breathtaking enough to sustain you and keep you wanting more. Finding influence in everything from Alice in Wonderland to Song of the South to Toni Morrison, Love has fashioned an original story out of one girl’s love for her father and a perceptive look into race relations.