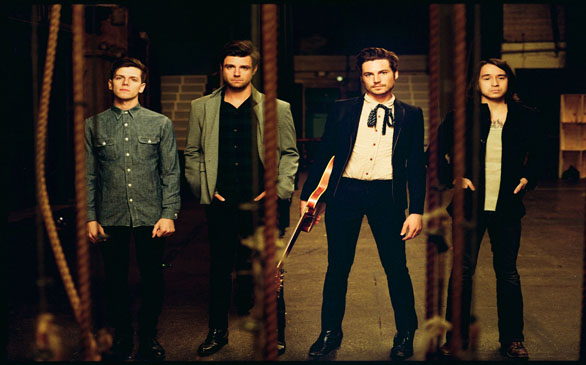 The decision to self-title an album is not one to be taken lightly, often carrying symbolic weight for a band employing it. Though they’ve been flying under the radar for a while, such is indeed the case for San Diego natives Augustana, and frontman Dan Layus is confident his band’s self-titled third record is their best work yet. “Boston” may have put the piano-driven melodic rock band on the map five years ago, but where they’re at now promises to make sure they stay on it.

“This is the first record that I’m really proud of front to back, and don’t have any regrets about any of the songs,” he says.

While many bands liberally throw around similar statements, Layus isn’t the insincere type, nor can he afford to be.

“I think a lot of it has to do with being young, but we didn’t really put so much work into the end result with the other two albums,” he says. “We had to swing for the fences this time, because there’s a lot at stake. I don’t know if there’s anything else I could do as a career, so it had to feel like it was the best we could do.”

Juggling the responsibilities of parenthood with the demands of being a professional musician, the timing just felt right for Layus to reevaluate his band’s approach to songwriting.

“It still needed to not alienate fans of the previous records. That’s why we have songs like ‘Counting Stars’ on there, for the people who like the more polished and straightforward things,” says Layus, “but the real focus is on songs like ‘Steal Your Heart,’ ‘Borrowed Time’ and ‘Hurricane,’ the stuff that’s a little more … ‘fuck it,’” he adds with a laugh.

Already known for his signature emotive vocals, this album sees Layus take his singing and expository lyricism to a new level of vulnerability.

“It’s been a long three years. A lot of my life is on display in this record. I’m more nervous about that than I ever have been in the past,” he says. “Maybe because life and consequences are getting more real, there’s more riding on the line this time.”

While Layus is optimistic about his latest work, there is still an underlying heaviness balancing it. Though he jokes about settling into a life of domesticity as a “stay-at-home dad,” being in a band isn’t the lofty rock star fantasy that many of his contemporaries have, or that he himself once had.

“I’ve spent my entire adult life doing this. Having the responsibility of a family to support, I take every aspect of this seriously. Sometimes I envy how simple it was when I was 20, I wish I could have seen it back then,” he says. “Not that I’m not lucky now, but I definitely have to fight harder to keep things moving in a positive direction. We’ve been fortunate to have some success on radio and TV, but if we didn’t tour six to nine months out of the year, we wouldn’t have a career. It can be frustrating, but it can be rewarding when everything comes together.”

Stressful as the music industry may be, quitting was never an option for Layus. After all, what kind of example would that set for the kids?

And that’s certainly not to say family life doesn’t offer its own unique rewards for Layus.

“Because my daughter is 4-and-a-half, I probably know the new Taylor Swift record better than my own record,” he laughs. “She knows Dylan, Petty and Bruce, but she definitely likes to blast Taylor.”