Hollywood Undead: Peek Beneath the Masks 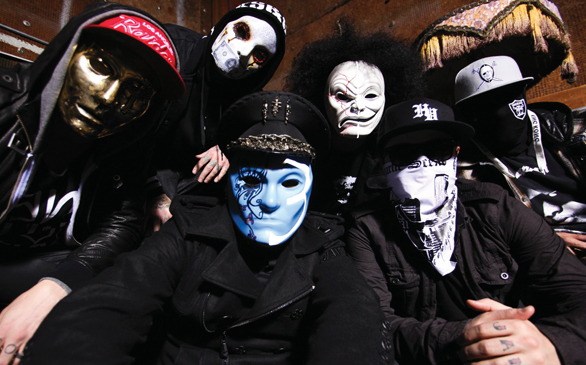 Sitting down to talk with a band you’ve never met and only seen live could result in a pretty average conversation. Sitting down with a band to talk about their new album and tour – when you’ve seen them perform and don’t really like them – is pretty interesting. Hollywood Undead blew it for me when I saw them live. They had a ton of energy a year ago when I watched them take the stage. I saw one thing, but the sold-out crowd was seeing another.

With Hollywood Undead’s new album, American Tragedy, just hitting stores and a tour underway it was time to find out more about this group. They wear masks and sing songs that are simultaneously about “last night” and social issues. For some, they are a joke and to others, their favorite band.

Johnny3 Tears is able to shed light on where they come from, which gives you an idea of what this band is actually about.

“We had all been in bands, together and separate. Then after getting tired of the whole race, we got together, started incorporating all the things that we like to do and let go of all the considerations of what other people would think. Three months later, we got signed, and we got all those things we worked hard for.”

Most people only see the party side of group, not the other side that talks about “real” issues.

Johnny continues, “There’s an issue that they might only know us for that song and discount other aspects of the band. It’s always been a concern, especially of mine, because there’s some very serious material that we put a lot of heart into. The idea of that being ignored is troubling.”

Hearing this alone should clue in some of the haters that these guys do reach beyond the bottle for a song. Johnny even compared their band to the Beastie Boys because they were known for “(You Gotta) Fight for Your Right (to Party)” and moved on to deal with and be respected for dealing with some very serious issues.

“But,” Johnny adds in regard to being taken serious all the time, “who doesn’t want to talk about last night and all the weird shit that happened?”

Well, what about the masks? At the show I went to, they took them off after the third song and not all at once. It seemed as if it was a cumbersome gimmick. After seeing Slipknot in full gear throw down in the heat for years and even after watching Daft Punk in action, this needed clarification.

“When we started off with the masks it was more of a visual interpretation of what we saw the band as: unique as the music. We saw it as another outlet besides the music … and wherever the creative side of the band goes, the masks will go with it,” replies Johnny.

So, with this run, what will fans get besides some new masks on their favorite band?

“More production, because we want to make it new for the kid that’s coming back for the fourth time,” says Johnny. “But what’s exciting for us, is playing the new material. We toured on a record for two years, playing the same songs gets boring. It’s exciting for us to go out and play new material and see how people react – to find out what song is good live and what isn’t.”

Speaking of new material, American Tragedy sounds great. The production is top of the line and will crush your car system if used improperly. It also takes the band into a theme that’s not indicative of anything they’ve approached before with the song “Coming Back Down.” Talking about suicide isn’t an easy subject and to do it right, it takes the proper tone.

Johnny comments on why it was a risky move: “That song on the record more than any, we’re going to get static for because it is a departure. Some are going to hate it, and others are going to love it. We’ll just have to wait and see.”