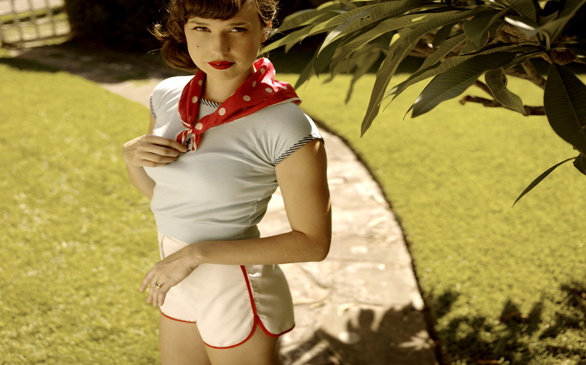 Australian songstress Lanie Lane is one of the hottest acts going in Oz right now; she recently sold out shows at the Sydney Festival and the Adelaide Fringe Festival and won thousands of new fans as she toured Australia with Justin Townes Earle. Lanie (pronounced “Lannie”) grew up surrounded by blues, jazz, folk and soul music, and her singing style channels everyone from Muddy Waters to Doris Day.

“I feel like I’m a mix of modern and vintage,” Lane says. “It’s not like I’m a retro act … I’m not conservative with my style. I’m aware that there are other ways of doing things, and I just go with what feels right at the time.”

Lane will no doubt really blow up when her debut album comes out stateside later this year. In the meantime, you have two chances to see this emerging talent in fairly intimate settings: Lane plays the Redwood Bar & Grill May 2 and Hotel Café May 3.

“American Idol” judge Steven Tyler, also the frontman for long-running rock band Aerosmith, is ready to tell all. The legendary singer’s no-holds-barred memoir, Does the Noise in My Head Bother You?, releases on the Ecco imprint May 3.

Never at a loss for words, Tyler says of the book, “I’ve been mythicized, Mick-icized, eulogized and fooligized, I’ve been Cole-Portered and farmer’s-daughtered, I’ve been Led Zepped and 12-stepped. I’m a rhyming fool and so cool that me, Fritz the Cat and Mohair Sam are the baddest cats that am. I have so many outrageous stories, too many, and I’m gonna tell ’em all. All the unexpurgated, brain-jangling tales of debauchery, sex and drugs, transcendence and chemical dependence you will ever want to hear. And this is not just my take; this is the unbridled truth, the in-your-face, up-close and prodigious tale of Steven Tyler straight from the horse’s lips.”

The book will initially be hardcover only with a list price of $27.99.

Los Angeles-based singer-songwriter and guitarist Angela Correa is the musical visionary behind the indie DIY group Correatown, and some of her recent inspiration came from the stars, resulting in the group’s next full-length release being entitled Pleiades. That record drops in September and not a lot is known about it at this point, but fans can hear new Correatown music on May 31 when a 10-inch vinyl EP called Etch the Line drops. The EP previews four songs from Pleiades as well as feature two new remix tracks.

“I always want to evolve,” says Correa. “When I began writing songs for our latest recordings I kept imagining sounds and instruments that would change the direction of the overall soundscape. The more we explored different arrangements and instruments, the more I felt the possibility of having a less organic sound as a more evocative creative compass, pushing sonic boundaries.”

Correatown plays an EP release party at the Satellite June 8.

Want to spend an evening or a weekend enjoying music at the clubs on the Sunset Strip? Here’s a way to do it that potentially saves you some money. Book a room at one of the participating hotels adjacent to the Strip and receive a complimentary Sunset Strip VIP Club Pass. The pass is good, during the duration of your hotel stay, for unlimited free entry to the Viper Room, the Roxy, the Comedy Store, Whisky A Go-Go, House of Blues Sunset Strip, the Key Club, the Rainbow and the Cat Club. Participating hotels are the Andaz West Hollywood, Grafton, the London West Hollywood, Mondrian, the Standard, Hollywood Sunset Marquis and Sunset Plaza Best Western. Program begins May 1. thesunsetstrip.com/vippass

San Francisco-based psych-singer Tamryn has a new record out called The Waves; catch her in concert at the Troubadour on May 5 and 6 when she opens for the Raveonettes. Much beloved, Grammy Award-winning singer Colbie Caillat has announced that her new album is called All of You and drops on July 12. Caillat is also the star performer of the Royal Wedding Event live broadcast that will air on TLC April 29.