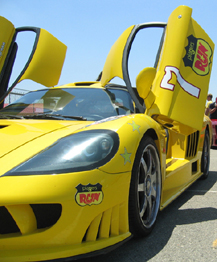 Who drives a Lamborghini from Beverly Hills to Miami Beach just for fun? Some of the first members to join Players Run, that’s who. If you’ve ever dreamed of spending a week cruising the highway, speeding through racetracks and partying at special VIP parties all across the country, Players Run may have planned something that can make your dreams come true.

Each year, less than 100 lucky teams participate in an invitation-only adventure that includes taking your car on the ultimate cross-country road trip. The main idea is NOT to win a race or become a roadway speed demon (although pit stops at a couple racetracks are always on the agenda and make for some of the best memories). Rather, Players Run is all about bringing car lovers together to chill with new friends who share a love for driving and partying.

And guess what? All you have to do is fill out an application and you too could be invited to join the fun!

In 2003, Players Run planners invited 50 teams to take part in a 3,000-mile excursion. The mission: drive your car from Los Angeles to Miami in six days, stopping to rest at a luxurious hotel in a different city every night. The players spent their days racing Indy cars on racetracks, navigating through the ocean on powerboats and flying to their destinations in helicopters. After-hours, the teams had their choice of relaxing at a 5-star resort, enjoying a spa pamper session or jumping back in the car to head straight to the city’s hottest nightclub to party VIP-style. A grand-finale finish to the weeklong expedition came in the form of a special party thrown on the Players Run Mega Yacht, in Miami, to honor the drivers and their love for the road.

And the fun hasn’t stopped since. Every year Players Run gives applicants a chance to park themselves behind the wheel by planning a new cross-country voyage that attracts car lovers from all over the world.

Do your homework. Go to www.playersrun.com and read the General Information section. Also, take a look at the Participation and Registration Agreement. It will tell you everything you need to know before applying.

Fill out the application. Click the application link on the Web site’s home page and be prepared to tell Players Run a little bit about yourself. But most importantly, make sure to submit your form before it’s too late.

Wait for an invitation. It takes only 48 hours to find out if you’ve been chosen to be escorted across the nation as you and a few new friends take your cars out for a six-day test drive.

Although an entry fee is required after receiving an official invitation, your payment is transformed into a road trip full of extraordinary entertainment. From dinner to dancing, Players Run plans everything. The only thing left to worry about is making sure your car stays fit for the open road.

The location of each event is hidden from the drivers until the welcoming rally. Past surprises have given players a chance to do more than just drive boats and lounge on yachts. Certain mornings included helicopter rides from Times Square to Niagara Falls, while some evenings included short trips to hotel spas for a little off-road relaxation.

And when it comes to fun and games, Players Run always creates an itinerary that ensures the teams get an opportunity to play in the ultimate way. Whether judging bikini contests on Daytona Beach or racing other street warriors around the Daytona 500 racetrack, good times are guaranteed to be on the map.

No ticket counters, no baggage claims and no airport lobby layovers. Players Run is strictly for car buffs that need a good excuse to hop in the driver’s seat and hit the asphalt. The destination: several major cities across the United States. Special instructions: take the scenic route.

Past cities visited include:

Do you collect classics? Are you fixing up a vehicle that has a special charm? If so, now is the time to pull your prized joy out of the trophy case and push the pedal to the metal on the open road.

Although breaking speed limits is only allowed on designated racetracks, simply taking an up-close look at more than 50 amazing vehicles straight from the private collections of fellow car connoisseurs is all part of the fun. From Lamborghini Gallardos to Plymouth Prowlers or a Mercedes coupe to a souped up Chevy Nova, exotic cars and the owners who actually drive them can join together through Players Run to take a joy ride across the countryside.

But don’t worry, your car doesn’t have to be expensive to be classified as exotic. In fact, Players Run accepts all vehicles based on "their uniqueness, not their price tag." Car lovers are invited to bring their vehicles out of the garage not to show off, but to enjoy the ride.

THE GIRLS, THE GUYS AND THE PARTIES

PlayersRun.com is packed full of photos and video clips so you can get in on the action. Guys get to catch a glimpse of women in bikini tops, cut-off shorts or low-cut, revealing racing suits, while the ladies get to sneak a peek at men covered in tattoos, cowboy hats or GQ suits and sunglasses.

And since a nightly VIP party in a different city follows each day on the road, everyone gets an opportunity to spend some private time with the local eye-candy. Even Hugh Heffner and some of his blonde bunnies have stopped by to grab a few drinks at a Players Run bash. So, if you are invited to join the Players Run crew, don’t sign-up just to drive, come prepared to mingle, too.

For more information and to apply for Players Run 2006, visit www.playersrun.com.