With 'Prom,' Disney Aims for Teens, Not Their Little Sisters 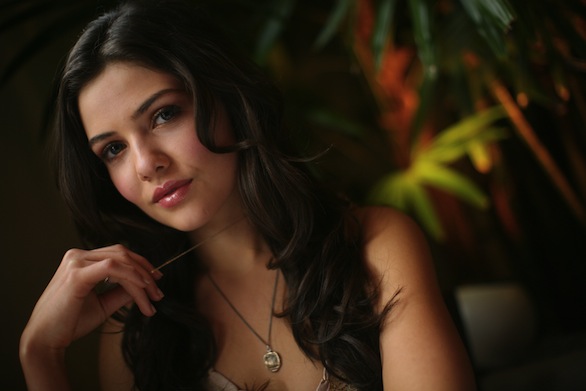 Chicago area native Danielle Campbell, pictured April 6, 2011, stars in "Prom."
(Credit: E. Jason Wambsgans/Chicago Tribune/MCT)
Walt Disney Studios is hoping to score a date with an audience it long has found elusive _ teenage girls _ with "Prom," a coming-of-age story that opens Friday. The $8-million film, among the first to be put into production by studio Chairman Rich Ross, is a more mature take on teen life than the "High School Musical" franchise he oversaw during his tenure at Disney Channel. But in adhering to the family-friendly Disney brand, "Prom" omits the naughtier aspects of the big night, specifically drinking and sex. Some question whether this chaste portrayal will ring true with the teen audience the studio is courting.

"I think the movie will do really well, but I don't think it will reach the demographic they're aiming for," said Tina Wells, chief executive of Buzz Marketing Group, a firm that specializes in youth communications. "It will reach their little sisters."

Pre-release audience surveys reveal that "Prom" is reaching an audience of girls as young as 12, who won't be renting a limo any time soon, according to people who have seen the data but asked not to be named because the information is confidential.

Nonetheless, Disney's ambitions for "Prom" extend beyond its desire to attract the same teens that made the "Twilight" vampire series into a phenomenon. Despite the film's modest cost, Disney is hoping to lure moviegoers into buying related items, including "Prom"-inspired party dresses.

"Prom annually in the U.S. is a $6-billion business, from the limousine to the dress to the flowers," said Sean Bailey, Walt Disney Studios production president. "If we have good fortune (with the film), we will take a hard look at that (market) from our consumer products, to our publishing, to our channels, and think about where we go from here."

The International Prom Assn., a trade group based in Jefferson City, Tenn., estimates that teens will spend an average of $900 a couple on the big event. Finding such a lucrative niche is attractive to companies in the licensing business, which are looking to enter markets that aren't already flooded with competition.

"The key is to create something that the large retailers are going to recognize as an opportunity and then fit in," said Marty Brochstein, senior vice president for the International Licensing Industry Merchandisers Assn.

But rather than unfurl the full force of the Burbank giant's powerful marketing machine on "Prom," Disney is taking more of a restrained approach, similar to its tack on the original "Pirates of the Caribbean" movie in 2003. Disney enlisted its publishing arm for a novelization of the movie, and the consumer products group licensed two of the film's gowns to Alfred Angelo, a major bridal house that also sells a line of Disney princess-inspired wedding dresses.

The bridal designer and retailer furnished its entire collection of 80 prom gowns for the movie and touts its participation with "Prom" tags that associate these formal lines with the film. The Alfred Angelo store in Brea also served as the setting for a scene in the film in which the main character, Nova, played by "Friday Night Lights" actress Aimee Teegarden, tries on dresses.

"Disney's intention was that it would hit high school kids _ they definitely were looking to this to be much older-skewing than, say, "High School Musical," said Denise Wash, Alfred Angelo's marketing vice president. "The fact that it's coming out before the peak prom season _ there's going to be more interest in it as well."

Prom season spans a 24-week period that begins in early March with schools in the South and continues through June, with most of the dances held in early May.

(c) 2011, Los Angeles Times. Visit the Los Angeles Times on the Internet at http://www.latimes.com/. Distributed by McClatchy-Tribune Information Services.
Article posted on 4/29/2011
This article has been viewed 4472 times.