This Year, Summer Isn't Only About the Men 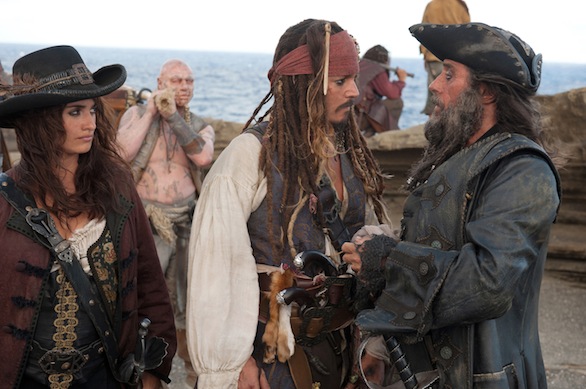 Captain Jack, Angelica, Blackbeard on an island where they hope to find the fabled Fountain of Youth
(Credit: Peter Mountain/Courtesy Disney Enterprises, Inc./MCT)
From its earliest days, Hollywood has been a boy s club. And summer traditionally is the season of boy movies _ big, loud, rude and not terribly smart.

So what are we to make of the summer of 2011 when so many titles suggest, well, an estrogen-centric approach?

It's not as if bad boys and manly men will be AWOL from the megaplex over the next four months _ not with "Thor" and "Green Lantern" and "Captain America" and "Cowboys vs. Aliens" among the most anticipated titles.

But movies for, by and about women will be all over the place during the hot days. Even in traditional guy genres women are playing bigger and more important roles. In several cases they're the main reason I want to see the movie.

Take, for example, "Pirates of the Caribbean: On Stranger Tides" (May 20). My attitude toward this hugely popular franchise has mutated from mild amusement to stupefying boredom. After the third one I swore I'd never watch another.

And yet I'm intrigued by the prospect of seeing the Oscar-winning Penelope Cruz all dolled up in swashbuckling finery. The simple fact that she's a new member of the cast _ combined with "Chicago's" Rob Marshall replacing director Gore Verbinski _ makes me want to give these goofy buccaneers another chance. Likewise, I was getting burned out on the "X-Men" franchise until I heard that Jennifer Lawrence (an Oscar nominee for "Winter's Bone" and my best bet for major star of tomorrow) would appear in the prequel "X-Men: First Class" (June 3). She'll play young Mystique, the blue-skinned shape-shifting mutant previously portrayed by Rebecca Romijn.

Speaking of blue-skinned beauties, there's also Smurfette. She's the only female member of her race. Nevertheless, you have to be just a bit tickled by the premise of "The Smurfs" (July 29), a blend of animation and live action in which the little creatures find themselves stranded in our world. (Smurfette is voiced by Katy Perry _ 'nuff said.)

It can't be a coincidence _ though it might not be good business _ that three female-centered wedding-themed comedies are opening on two consecutive weekends _ "Jumping the Broom" and "Something Borrowed" (both on May 6) and "Bridesmaids" (May 13).

But it's "Bridesmaids" that really has my attention. Imagine "The Hangover" with "Saturday Night Live's" versatile Kristen Wiig as the main character. From the trailers, I anticipate an Apatow-ish level of raunch. He is producing, after all.

In fact, we're seeing a slew of movies in which female characters misbehave. In "Bad Teacher" (June 24), Cameron Diaz is a boozy, foul-mouthed junior-high educator who gets dumped by her sugar daddy and sets her sights on a colleague (Justin Timberlake).

Her character's life is "one big F-bomb," Diaz told The Associated Press: "Usually, when you swear on set, they're like, 'Oh, we're not going to be able to use that one,' or 'We only get one of those, so let's pick where it goes,' " she said. "That's not fun, picking where you're going to swear. Who wants to do that? You don't want to use it judiciously. You want it to be liberal, and you want to sort of pile it on. Slather it on."

In "Larry Crowne" (July 1), Julia Roberts _ usually an on-screen good girl _ plays a grumpy community college instructor. One of her new students is a recently-fired fellow (Tom Hanks) hoping that an educational retooling will land him a new job.

And in "Horrible Bosses" (July 8), Jennifer Aniston plays ... yes, you've guessed it ... a horrible boss! In this case an aggressively sexual dentist who preys on her male assistants.

Emma Stone will have three films this summer. She has a supporting role _ the leads are Mila Kunis and Justin Timberlake _ in "Friends With Benefits" (July 22). She plays the love interest of womanizer Ryan Gosling in "Crazy, Stupid, Love" (July 29).

But what I'm really looking forward to is Stone's leading performance in "The Help" (Aug. 12), playing a young writer in civil rights-era Mississippi who interviews the African-American maids of the town's richest white families. Based on the best-seller, it could be a sleeper hit about empowerment and equality.

And then there's young Miss Fanning. No, not Dakota, who has moved on to more grown-up roles. I'm talking about little sister Elle, who appears in J.J. Abrams' "Super 8" (June 10). In this yarn, kids making a home movie witness a mysterious wreck of a train from Area 51 and subsequent bizarre events. Stories of this ilk typically have been about boys, but her character stands out.

(c) 2011, The Kansas City Star. Visit The Star Web edition on the World Wide Web at http://www.kansascity.com. Distributed by McClatchy-Tribune Information Services.
Article posted on 4/29/2011
This article has been viewed 1538 times.