Game Day: 'Portal 2' is so Sadistic, It's Funny 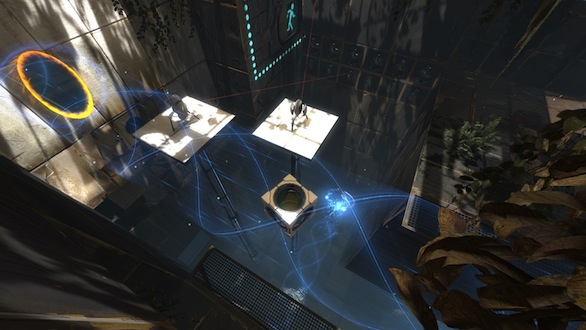 "Portal 2" is the quintessential "bigger and better" sequel that expands on the original.
(Credit: MCT)
"Half-Life 2" and its subsequent episodes are great games, and "Team Fortress 2" remains a popular online shooter, but the real star of Valve's 2007 collection, "The Orange Box," was the reality-bending puzzle game "Portal."

The game's concept _ use a portal-creating device to solve puzzle rooms by punching holes in reality _ was well known before its release, but "Portal" nonetheless took gamers off guard. It wasn't just challenging and clever; it also was the funniest game in years _ and who hasn't heard the phrase "the cake is a lie" once or twice?

In "Portal 2" the player's character, a silent woman called Chell, wakes up in a locked room and is told by a glitchy computer voice that she has been in suspended animation for nine ... somethings. Years? Decades? Judging by the decrepit room, centuries might be closer. Chell is visited by a bot named Wheatley who manages to guide her to a portal gun so she can make her way through the seemingly endless expanses of the complex. Eventually they run into the remains of GLaDOS, the master of the vast Aperture Science facility in "Portal," whose deadliness was matched only by her pettiness.

Make that "is," because GLaDOS isn't down for the count. Soon Chell is on the receiving end of another round of sadistic tests, with the relentless, bitter heckling as hilarious as ever.

And then the game takes a turn, and here our synopsis stops, except to say that the game will take Chell much deeper into Aperture's history and buried secrets than the first game did. And that it's really, really funny; from Wheatley's frantic babble to GLaDOS' menacing lilt, every line crackles with wit.

The portal gun remains Chell's crucial tool _ it can create a hole in one place and a second hole elsewhere, and each leads to the other. There are many useful applications of that principle, from simply using two portals to reach a higher ledge, to jumping from a height into one portal to rocket out the other.

But there are new variables to consider. Laser beams can destroy defense turrets and be redirected with prisms to activate switches. Bridges and walls can be made of hard light. Colored gel is as bouncy as flubber and other new additions make for a set of puzzle challenges that build on the first game without repeating it.

"Portal 2" also features a challenging cooperative mode (online only for PC, split-screen or online for consoles) that has two players, in the guise of robots undergoing teamwork testing, working in tandem to overcome a set of puzzles entirely separate from the single-player mode.