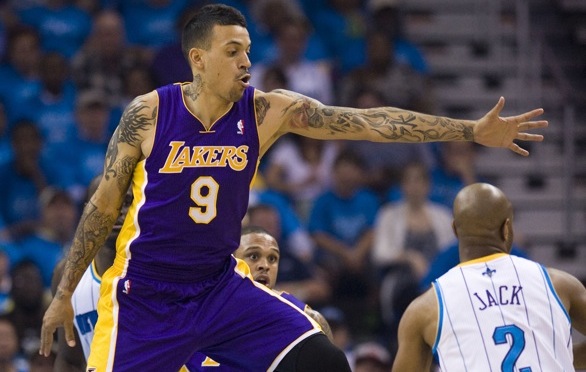 Matt Barnes and the Lakers are out to play hard and win.
(Credit: Kevin Sullivan/Orange County Register/MCT)
We know this is going to be a darn good series of professional playoff basketball. Yes, indeed. And it might even turn out to be a great one for ages to come.

But both the Los Angeles Lakers and Dallas Mavericks are playing off any tension between them. We will have to patiently wait until the first game emerges and, thusly, ends (Monday, May 2 at Staples Center, 7:30 p.m.).

“We’re not worried about anything that happened in the past,” energetic Matt Barnes confesses, as indicated by several media outlets. “I’m not carrying anything over. I’m not trying to get into trouble or technical fouls or hurt my team in any way. We’re going out there to try to win, play hard. That’s the only chance any team has to beat us, to play harder.”

During the regular season, both teams played each other tough and hard. Shoves, technical fouls and aggressive verbal confrontations, among other incidents, transpired between both teams.

With the experience, talent, depth and because of Kobe Bryant, the Lakers will win series. It will not be easy, but eventually Los Angeles can look forward to the conference finals. The Lakers hold home court edge again, but Bryant pushes that aside.

“I don’t care about home court, I really don’t,” Bryant says. “It makes a lot of people nervous, but I don’t care.”

Interesting as it may sound, Dallas matches up quite nicely with the two-time defending champions. Led by superstar Dirk Nowitzki, Dallas could actually win this series. But they don’t have Bryant, so they won’t.

Just like the Lakers, Dallas has length and size with Brendan Haywood and Tyson Chandler in the mix. Jason Kidd is good, Jason Terry is a beast off the bench and Shawn Marion can truly play.

“They’re the best team money can buy, really,” Lakers head coach Phil Jackson tells reporters after a practice session in El Segundo. “So are we.”