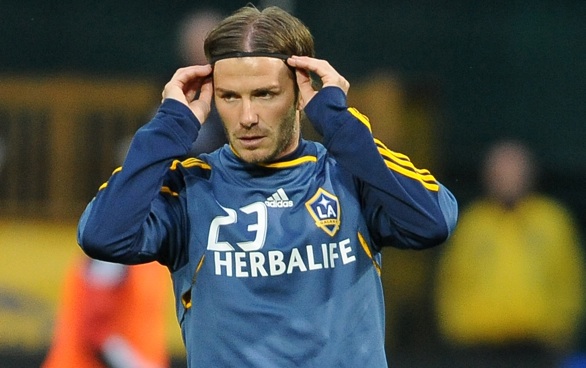 Despite Beckham's arrival from London, the Galaxy lost in Dallas.
(Credit: Chuck Myers/MCT)
English soccer star David Beckham is a high-profile celebrity when off the field.You know it. The world knows it. He knows it. Heck, the Royal Family knows it.

After having been invited by the royal couple, Beckham left the Galaxy during the week to go to London for the Royal Wedding on Friday. Many criticized t his action from Beckham. I was one of them.

But he made it to Dallas on time and before his team arrived. This charged head coach Bruce Arena up enough to start Beckham. However, the team still suffered a 2-1 loss in Texas to FC Dallas Sunday night.

The teams experienced drastic weather, beginning with a powerful rainstorm and followed by thunder and lightning. This caused a long delay, which came at the 83rd minute of play. Both teams appeared to be headed to the locker rooms early, but they came back on to the field later to finish with three minutes of added stoppage time.

After a scoreless first half, FC Dallas (2-3-1, 7 points) got on the scoreboard first with Fabian Castillo’s goal in the 47th minute. Los Angeles responded quickly, as captain Landon Donovan’s third goal of the season found the net four minutes later. Brazilian Juninho received the assist.

With less than three minutes to go, Brek Shea broke the knotted score in the 88th minute.

“I looked up, and I didn’t see anybody in the box,” Shea says, according to multiple media outlets. “I just floated it in there, and it went in. We got the three points.”

Beckham played the entire game after flying from London to Dallas, but the team could not win on the road.