Ethier Is in the Books 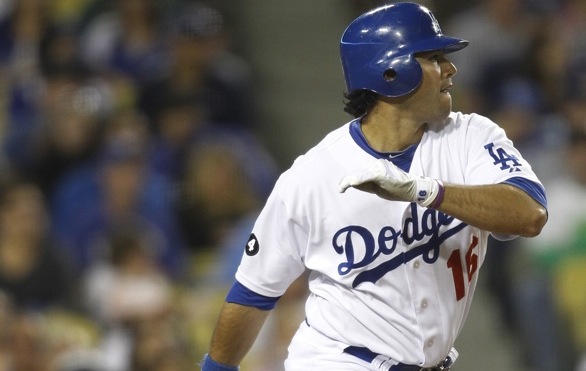 Andre Ethier gives Dodger fans something to root for.
(Credit: Robert Gauthier/Los Angeles Times/MCT)
There really isn’t much to cheer about at Dodger Stadium when the Dodgers play. Sometimes they win. Sometimes they don’t. Los Angeles has the ownership scandal. The club is averaging a lot less fans per game than last year. And a Giants’ fan was badly injured on Opening Day.

Yes, the Dodgers have been in the news lately. More often than not, it has been to report negative occurrences within the organization, or perhaps a win here or there. Now, however, outfielder Andre Ethier is giving the squad and the city something to root for. Something to aspire to. Even something to be inspired by.

Ethier currently sports a 27-game hitting streak that was extended Sunday afternoon with an infield single that made the crowd loudly cheer. Let’s just say that the less than 40,000 present fanatics were happy to witness at least one marvelous thing happen at the venue. Ethier is humble as they come. Good as anyone. Hard working as the most noticeable person performing hard to earn a good living, but he just plays the game as it should be played.

At age 29, he has become the face of the franchise, alongside stud Matt Kemp and solid starting pitcher Clayton Kershaw. Thus far this season, Ethier carries a batting average of .378, three home runs, 16 RBI and 15 runs scored. Oh yeah, he now holds the record for a 26-game hitting streak during the month of April.

On Sunday, the Dodgers lost to the Padres by a score of 7-0 in a rubber match that left many in disbelief and uncertain of the team’s current status. Nonetheless, it still did not matter.

“I was just trying to figure out a way to get the job done and get on base: a walk, error, hit anything that gives us a chance to start scoring runs, especially in a ballgame like that where not much offense is being shown,” Ethier humbly says.

All those in attendance in the beautiful day got to see their favorite player extend his hitting streak, and at least keep hope for another day where he’ll aim to add to the streak as the Dodgers face the Cubs Monday night, May 2, at 7 p.m.