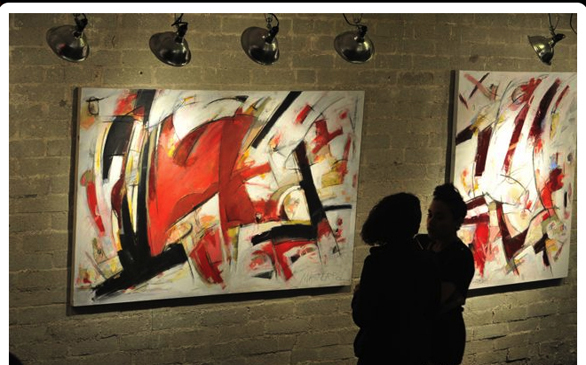 “Did I just die and go to heaven?” That’s exactly what I thought when I entered Create:Fixate’s ninth showcase of curated art and music. April 9 at the Premiere Events Center, Create:Fixate returned with its spring show entitled Rise, a truly eclectic event with numerous artists and musicians.

Starting at 4 p.m., Rise lasted until 2 a.m., giving the opportunity to all ages from children to adults engage in a plethora of artforms. The Kids Kreativity Zone, open until 7 p.m., allowed aspiring youngsters to unleash their own creativity with provided art supplies. The “Optical Lounge” and “Audio Lab” were two other areas presented to attending culture lovers. Over 30 visual artists came together in the “Optical Lounge,” such as Danuta Rothschild who mesmerized viewers with landscapes and portraits in a foreboding but surprisingly hypnotic manner and Gwen Samuels who created intricate wall sculptures. Best part of the lounge? An on-site painter, Ashley Montague, took the audience on a journey of his artistic world.

This wasn’t the end. Create:Fixate wouldn’t be Create:Fixate without the music. The “Audio Lab” was a big bang of art and music. Garth Trinidad and Felix Bloxsom (PLASTiC PLATES) gave the night a spin with their acclaimed DJ-ing. If a more intimate music setting is what turns you on, the headphone lounge hosted by SuperTall Paul Newman would have had you rolling on the floor both from relaxation and humor-pretty ironic, I know.

To those who have missed the perfect moment to have an art-gasm, watch out for Create:Fixate’s return next year.