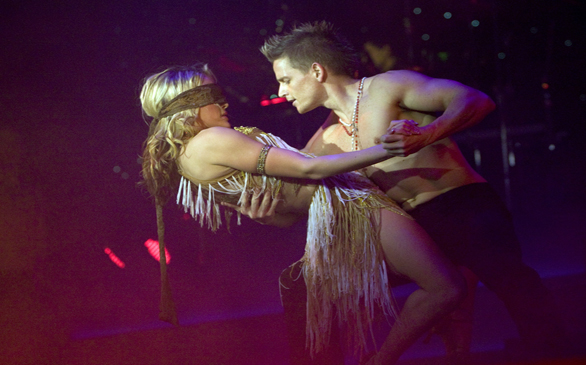 The ballroom dance spectacular is a sizzling show that capitalizes on America’s current dance fascination. Directed and choreographed by Jason Gilkison, a renown dance champion and guest choreographer for “So You Think You Can Dance,” the L.A. show also features numerous “SYTYCD” alumni including Anya Garnis, Pasha Kovalev, Robbie Kmetoni Janette Manrara and Karen Hauer.

Coming off a Broadway run might give some the wrong impression – this isn’t a musical – but the simplicity of it all really accentuates what’s important: the dancers. What the show lacks in intricate set design, it more than makes up for with toned legs, rippling abs and scant costumes. The real visual mastery is the light and shadow that plays off the well-conditioned bodies of each individual.

The dancers seamlessly shift throughout a dozen different dance styles from the Cha-Cha to Waltz and Tango to Paso Doble. While most of the music is pre-recorded, the vocals – sung by Peter Saul and Vonzeli Solomon – are solid. Additionally, the drums and percussion by Joseph Malone and Henry Soriano, are just as dexterous as the dance moves and add a wonderful character touch to much of the choreography. “Burn the Floor” is a riveting show that will have people questioning the limitations of the human body. If the dancers aren’t breathless by the end of the two-act and nearly two-hour-long show, then the audience surely will be.