Listen: iPods Can Damage Your Ears, Cause Hearing-Loss Experts Warn 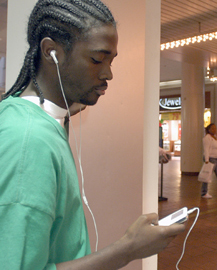 Jeff Hurst, 24, and Gianni Lee, 19, love their music so much they listen to it on their iPods for hours – maybe too many hours.

Hearing experts wonder whether the frequent use of these devices, particularly with the inserts that sit within the ear, are contributing to noise-induced hearing loss.

"The incidence of hearing loss is underappreciated," said Thomas Willcox, associate professor in otolaryngology at Thomas Jefferson University. "We’re going to have a boom of this population because of the increased exposures that previous generations haven’t had."

About 12 percent of children and teens in the country – more than 5 million – have noise-induced hearing loss. Hearing loss in general has doubled in the United States in the last 30 years.

Hearing loss is permanent and additive, which means the longer one listens and the greater the volume, the more likely one will develop problems with their hearing over time.

Willcox has seen several teenage patients in the last year whose parents brought them in complaining that their kids listened to the television very loudly and didn’t respond when they were told to turn it down.

The parents wanted to know if their kids were just being typical teenagers or if they had a hearing problem.

"They don’t have ear disease," said Willcox. "The ultimate risk factor is that they’re using their iPods frequently."

There are few studies that examine kids’ hearing over many years, said Deanna Meinke, chairwoman of the National Hearing Conservation Association’s Task Force on Children and Hearing and assistant professor at the University of Northern Colorado.

One recent study examined several commercially available portable compact-disc players and found that the volume ranged from 91 to 121 decibels. Adding earphones that fit inside the ear increased the volume by 7 to 9 decibels.

Even the low end is considered over the threshold for safe, extended listening, which is 85 decibels for eight hours, according to the National Institute of Occupational Safety and Health.

Unlike the telecommunications industry, which regulates its sound outputs, there are no standards regarding the loudness of personal music devices.

Yet in Europe, iPods, for instance, are capped at 100 decibels. There is no such limit on those sold in the United States.

The National Hearing Conservation Association advises that if you have to shout above the music from three feet away, you should turn it down.

If someone else can hear your music from your earpiece, you are playing it too loudly, said Willcox.

A small increase in the volume can make a big difference in how long you can listen safely.

Are young people getting the message? Lee, a music producer, listens to his iPod at top volume, even though he’s heard about the possible damage.

"I like hearing it loud so I can hear all the instruments," said Lee.

Hurst, a bar-back at a Philadelphia concert venue, offers another opinion. He tries to adjust his to the lowest volume and still hear the words, and wears earplugs at work.