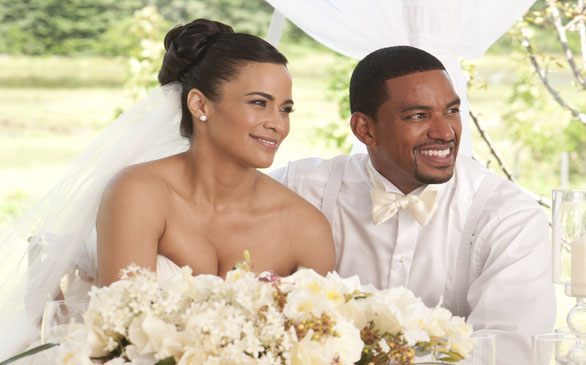 Paula Patton wants to set the record straight. She didn’t jump the broom when she married R&B singer Robin Thicke – and it’s not because she didn’t want to.

“I have to be real with you, I did not know of this tradition of jumping the broom until I read the script for the movie, and that’s the truth,” she frankly admits.

A tradition practiced in the early part of the 19th century among African-Americans, it’s a concept the actress says she would have considered – had she known about it.

“A lot of my friends who have gotten married didn’t do it either. I read the script and started taking to people and realized that it’s a tradition that is not done a lot of the time, but it is something that is done,” Patton continues. “I was fascinated by it, and I would have jumped the broom had I known about it. I think the idea that you are sweeping the past away, forming a union and jumping into the future to become a family is a beautiful idea.”

In Jumping the Broom, which is directed by Salim Akil (“The Game”), Patton plays Sabrina Watson, a corporate lawyer who gets engaged to a Wall Street broker, Jason Taylor (Laz Alonso), after dating for six months. With a wedding in the planning stages, things don’t go as smoothly as planned when their very different families meet for the first time at plush Martha’s Vineyard. As the wedding draws closer, the unanswered question of whether Jason and Sabrina will “jump the broom” causes friction between the families, who both have very different ideas on the marital concept.

“It’s a tradition that continues to be relevant for a lot of people,” says Akil, who was attracted to the film’s positive messages and realistic treatment of marriage and familial relationships. “When you jump over the broom, you leave what came before on the other side and start new. But no matter which side of the broom you’re on, there will be problems that have to be resolved.”

A ritual used to formalize unions between slaves during a time in America’s sordid past when they were not allowed to marry; Broom was the perfect choice for Patton, who was returning to acting after having her first child last year.

“My son was two months old when I got the script and I thought I was going to take a little longer off, but when I read the script I loved it,” Patton says.

“It’s about the importance of loving each other, while also understanding the differences,” adds the actress, who gained notoriety when she starred opposite Academy Award-winning actor Denzel Washington in Déjà Vu.

Written by Elizabeth Hunter and Arlene Gibbs, Broom was pitched to a number of production executives including co-producers Glendon Palmer, T.D. Jakes and Tracey E. Edmonds, the producer of Soul Food and the popular “College Hill” television series.

“Glendon and I had been talking about making a movie about African-Americans that we haven’t necessarily seen on screen before,” says Hunter. “There’s diversity in the community that isn’t often depicted in films, and we both feel it is important to see that we’re not a monolithic group. There are rich African-Americans, there are poor African-Americans and there is everything in between.”

With cast members that include award-winning veterans like Angela Bassett and Loretta Devine to Mike Epps, Meagan Good and Romeo Miller, it’s a cast that was carefully orchestrated.

“We were looking for a balance between very experienced, respected actors and up-and-comers,” continues Hunter. “The most important thing was to have really smart actors who could articulate their vision of the character and enrich the characters on the page.”

“One of the things that makes the movie accessible,” adds Akil, “is that everyone can recognize an uncle or an aunt – at their best and at their worst. We all have larger-than-life characters in our own lives. Since I was lucky enough to have a cast like this, I wanted them to play their own notes within the context of the composition we had. I think they did it beautifully.”

Jumping the Broom releases in theaters May 6.