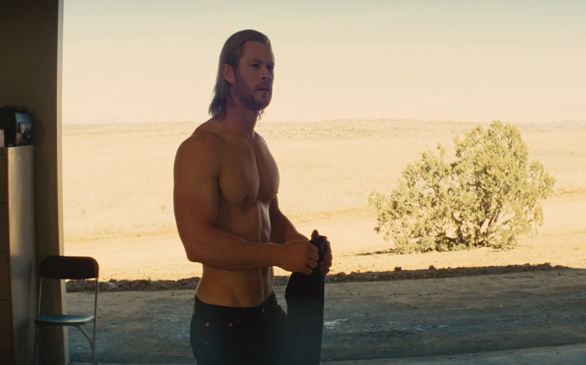 “If anyone can save us, it’s Chris Hemsworth.”

So decrees Kat Dennings, Hemsworth’s co-star in Thor, the next chapter of Marvel’s ever-growing Avengers franchise. Emerging as one of Hollywood’s most promising new action heroes with his affable Australian charm, stunning good looks and brickhouse of a body, Hemsworth stars in this comic adaptation about the titular Norse warrior whose arrogance and temper get him cast out of the fantastic realm of Asgard and exiled to Earth so he can learn humility.

Directed by Kenneth Branagh – better known for his way with the Bard than the CGI sword – Hemsworth, whose only other major role was as tragically doomed George Kirk in the first five minutes of Star Trek, was virtually unknown in the United States when he landed the highly coveted lead.

When asked what made the up-and-comer the perfect choice, Branagh replies, “I like the character of Samson or Hercules, this idea of a strong man who’s troubled by his strength, doesn’t know where to put it and is a wild man. I loved that reckless streak, and I love a hero who’s an absolute loose cannon, has no idea what he’s doing. Chris had this combination of confidence, charisma and humor that we needed.”

For the young Australian star, whom co-star Tom Hiddleston describes as having “charisma coming out of him in spades,” playing a part that is both a god and a superhero was the fulfillment of every childhood dream he ever had. Though he admits he didn’t know much about Marvel’s Thor comics, he says, “I would run around the house pretending to be a superhero as a kid. I had a Superman costume and a Robin costume – which was basically just green underwear and a cape – so to play [a superhero] as a slightly bigger kid just a few years later is just as exciting.”

Except that “slightly bigger” is a major understatement. Looking as if he was chiseled from marble, Hemsworth swats away any compliments about his godly physique with a chuckle as he noticeably blushes.

“I just did a lot of training,” he shrugs good-naturedly. “I noticed in the comic books, the guy was huge, so I had to get into the gym. The workout program for the film was more exhausting than shooting the film.”

However Branagh recalls Hemsworth’s gasp-inducing moment of topless as one he was less than embarrassed by.

“At one point I said, ‘Look, we have to know he’s a god. You have to take your shirt off. Do you mind?’ And [Chris] said, ‘I’ve been working out six hours a day for six months. Yeah, let me get my shirt off!’” he laughs.

“It’s like you can’t look directly at it,” she says. “It’s like good Medusa; if you look for too long, you die. But it’s good. You die from happiness.”

Hemsworth is undeniably handsome, but he’s also quite talented and took his time on set with the two Sirs – Anthony Hopkins, who plays Thor’s father, Odin, and Branagh – as his own master class.

Undaunted by his luminary colleagues, unfazed by the pressure of a superhero franchise resting on his well-defined shoulders as he makes his debut as a leading man, Hemsworth has a kid-in-the-candy-store attitude when asked about any nerves he might have.

“There’s a huge amount of pressure,” he admits, “but it’s the same sort of pressures as on any set where you want to make a good impression and a good film. But there was also the history of the comic books, the dedicated fan base, this big franchise. But the excitement I think overrode that, and I had so much fun.”

With his first day on the Joss Whedon-helmed Avengers film just around the corner, Hemsworth says he can’t wait to get back into Thor mode, though he would consider trading places with one of his co-stars.

“Maybe the Hulk,” he ventures. “Then I wouldn’t actually have to work out; they’d do it all with CGI.”

Thor releases in theaters May 6.