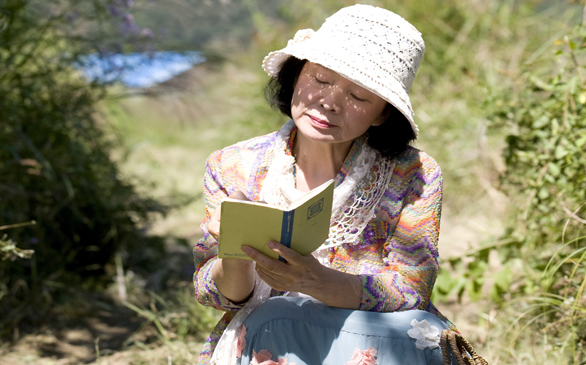 How you find poetic inspiration, to paraphrase the woman at an open-mic reading in director Lee Chang-dong’s new film, Poetry, is to simply write. “You never know what you want to say until you begin writing it.” That’s an approximation of what the woman tells Mija (Yun Jung-hee), a grandmother in South Korea who has been diagnosed with Alzheimer’s and takes up a poetry class to stave off its deteriorating effects.

Mija giggles at herself when she can’t remember everyday words. “Wallet,” for example, when she reaches into her purse to put away the cash she earns from her part-time home-nursing job; “bus terminal,” in another instance, when she tries to direct a cabbie to her destination.

Amidst Mija’s regular inability to articulate herself, however, she does so with everyday aplomb. She speaks of the joy in the sound of wind tickling the leaves on trees and the look of a fallen piece of fruit against the hard earth. Her world is quickly becoming an impressionistic one. But she is forced to express herself in ways she has difficulty doing when a teen girl’s suicide is prompted after being raped for six months by six school boys, one of whom is the grandson she raises alone at home.

Only select school officials and the immediate family members of the accused know about the rape. The tragedy isn’t spread across newspaper headlines and the local police are not involved, they say, to protect the boys’ future and the school’s. In this total lack of reproach, the boys’ fathers offer a financial settlement to the girl’s mother in exchange for her silence.

Here is an example of protecting the patriarchy if there ever was one. The dead girl’s strife isn’t spoken for, nor is the mother’s grief nor is Mija’s discontent with the settlement decision that was determined without her consent. She is forced to pay, but she doesn’t have the money.

Mija’s home and possessions make no buts about her class status. Her tiny flat is cluttered with trivial belongings. It’s the kind of chaos that’s organized in the precious way people organize things when they haven’t the means to stow them otherwise. Her mismatched table settings, curios stacked on the kitchen table and a TV stand hugged by trinkets are all of her worldly possessions. In this familiar space, Mija struggles to see things as the unique still-lives she longs for them to be.

Poetry’s clear digital photography captures her daily setting in a naturalistic way, using long takes, and slow, wide pans outside of the home across the cityscape as it actually is. The film’s upfront visual style is also a kind of poetry in its own right, opening up the spaces around Mija so she can hopefully talk about them in the poetry assignment she struggles to write by her class’s end.

Ultimately, Poetry is about creating memory. Pressured by the band of fathers who demand she pay her share of the settlement, Mija, with all of her humor and lightness of being finds a way to satisfy everyone without compromising the truth. She writes her poem. Her teacher says he will read it aloud to see if it is good. But the measure of its quality is in its making, and Mija has created a memory in place of her own diminishing one. A memory lives on because it is written.

Poetry releases in select theaters May 6.