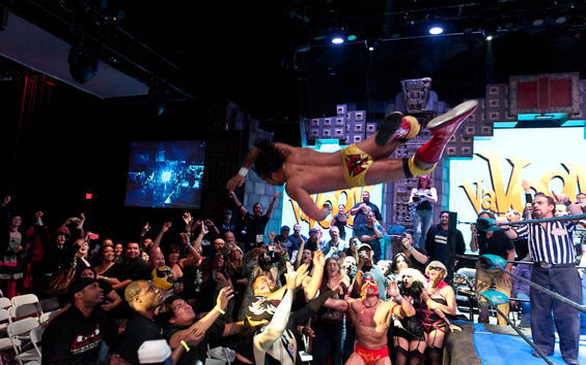 Back in February 2008, a friend of mine invited me to something called Lucha VaVoom playing at the Mayan Theater in downtown Los Angeles, and adamantly insisted that I wouldn’t be sorry if I came. Being the adventurous type that I am, I bought a ticket right away. With very little knowledge of what I was getting myself into, other than it had to do with wrestling (which was never my thing), I went along with it. I figured at the very least I was going to see something clever.

Boy, does it pay to be adventurous. When the show came to its glorious conclusion, and I had finished picking the pieces of my mind off the floor, I had an epiphany: Over the course of human history, many incredible triumphs have been created out of the pairing of two seemingly unrelated things. Moving images and sound. Needle and thread. Lennon and McCartney. Chocolate and peanut butter. And such is the case with the combination of Mexican wrestling (lucha libre) and burlesque dancing. That is what Lucha VaVoom is all about: sexo y violencia.

The basic structure of the show is you get masked wrestlers of all shapes and sizes fighting each other, and then in between each match there are exotically choreographed dance numbers by scantily clad women. On top of that, there are guest commentators who do comedy play-by-play on the action, some of which have been the likes of Patton Oswalt, Bobcat Goldthwait, Jeffrey Ross, Fred Armisen and Brian Posehn. It’s one of those things that is so awesome, you really need to see it to believe it. I’ve been going for three years now, and it never ceases to disappoint.

Like I said before, at no point in my life was I ever interested in wrestling. I always had respect for the physical side of it, but it just didn’t do anything for me. But all that changed. While I do have more respect for the aerobatic feats that the wrestlers are capable of in all wrestling, lucha libre is the better experience.

In regular wrestling you pretty much just get a bunch of dudes in Speedos with long hair doing more talking than fighting. A lot of the time is spent developing these boring storylines that see the wrestlers spending more time on the microphone talking trash. The fact is, in regular wrestling, the characters are just not that exciting. Lucha libre is all action.

What Lucha VaVoom delivers are the incredible characters with outrageous costumes that have become the signature of the show and keep people coming back. Each character has his/her own special mask and/or costume: There’s Chupacabra, a hulking green man with spikes running down his back; the Poubelles Twins, deadly female twin wrestlers; El Presidente, a presidential wrestler parody of Barack Obama who never fights without the help of his secret service agents; Dirty Sanchez (I’ll let you finish that one); and my personal favorites – Cassandro, the most badass cross-dressing wrestler ever, and the Crazy Chickens, men in chicken costumes that need to be seen to be believed.

On top of that, a lot of the audience (including myself) dresses up in costume while attending Lucha VaVoom. Oh, and I almost forgot. Another one of the single most awesome things about Lucha VaVoom, the Minis: Miniature wrestlers who can throw down, sometimes even better and harder than the big boys.

Now that I’ve got all that out of the way, I can get to the real point, which is to build excitement toward this year’s special Cinco De Mayo show at the Mayan Theater. Lucha VaVoom travels around the country and makes four stops a year in Los Angeles. There’s the Valentine’s Day show in February, Cino De Mayo, Summer Nacionales in June and the Halloween show.

Cinco De Mayo at Lucha VaVoom is always a blast, and if you’re considering making this your first time, you owe it to yourself. If you come and sit close to the ring, be ready to move. I may have also forgot to mention that the wrestlers come flying out into the audience.