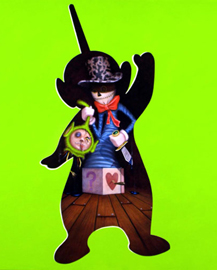 It’s de Jesus-palooza. It’s Coachella for your eyes. Yes, it’s a buffet, a smorgasbord, a random sampling, a potpourri, a Sam’s Club of art. If you’ve never been to La Luz de Jesus Gallery in Silverlake, this is the show to attend.

Artists Caia Koopman, Jason Maloney, Gretchen Ryan, Dave Dexter and Nouar exemplify why La Luz is known in some circles as un-LACMA (not a pejorative nickname) because it showcases art typically only found on Garbage Pail Kids – or in The New Yorker (really the same thing).

La Luz de Jesus Gallery came to be in 1986 as the brainchild of entrepreneur and art collector Billy Shire (who now has his own gallery). As the gallery will tell you, "Shire is considered hugely responsible for fostering a new school of art in Los Angeles prompting JUXTAPOZ magazine to dub him ‘the Peggy Guggenheim of Lowbrow.’"

The only theme these five artists share is that there is something comfortably unsettling about their work. Koopman paints mischievous anime-eyed adolescents with bugs for barrettes. As a child, Maloney was obsessively fascinated by ’80s skateboard graphics, classic slasher horror movies and heavy metal music – a homicidal jack-in-the-box holding Tinkie Winkie’s head attests to this. Having been involved in a horrible car accident as a teenager, Ryan uses the experience, along with her commitment to the neglected rights of animals, to inspire her haunting paintings. With a silent but deadly narrative, Dexter is my favorite of the bunch – viewing his work is like walking into another museum. And finally, Nouar (it’s German) … well, let’s just say her current interests are making recipes from old cookbooks, collecting vintage gelatin molds and listening to the Stanley Brothers.