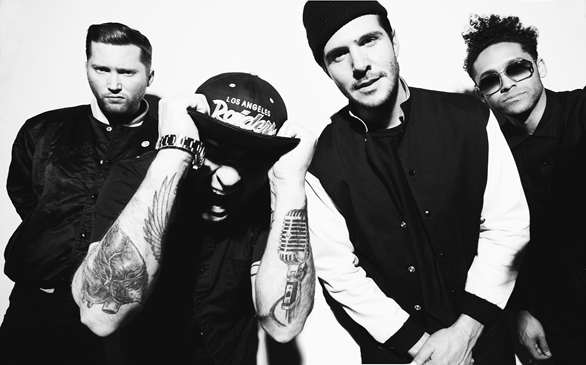 As youthful a genre as it is, hip-hop has been around. It has circled the globe since its New York roots to become one of the most compelling schools of music. Today it’s firmly planted in the mainstream. With heavily textbook pop influenced productions topping the charts, there is no question that hip-hop has been commercialized. And that is exactly why it’s so refreshing when a hip-hop group comes along that can fit into the commercial industry while representing the old school.

The 87 Stick Up Kids are doing just that with their new album titled Car Keys and Rabbit’s Feet. Comprised of Nashville, Squish, Deacon Trillionaire and DJ Rockwell, the Stick Up Kids formed together over the common interests of music, women, and getting their swerve on in L.A. house parties.

Now in league to take on the scene, these guys are doing hip-hop proper with a mass appeal flavor fit for the mainstream. Their album is a fresh take on an impacted genre that exhibits catchy party ballad hooks, clever punchy verses, and modern beats, all organized with high production values. According to DJ Rockwell, the album’s main producer, the sound of the entire album was designed around a single theme based around the first track on the album “Lights, Camera.”

“Even though there’s a lot of different songs and soundscapes on the record, they all tie in some way and have some touch to the opening track,” he says.

The beats themselves are hard-hitting head bangers that sound a little bit rock and a little bit gangster, but hip-hop through and through. Indeed claims Rockwell, the sound has its influences from other modes.

“It’s golden era derivative. It’s what we grew up on as kids, it’s what inspired us,” adds Deacon.

Although they are firmly rooted in hip-hop style, the 87 Stick Up Kids got off the ground catering to a very non-traditional crowd. They started playing to hipsters and indie-rockers in areas like Echo Park and Silver Lake where hip-hop is scarce, but they got a buzz going.

The Stick Up Kids did, and do, and rightly so because they’ve built a dedicated following. They’re not scared to use a few gimmicks to put on a show either, but the focus is still good old-school wordsmithing.

“The meat and potatoes are still there, but we confetti it up with confetti launchers, and stripers, and a hops holster, which is like a bullet [belt] which holds a 12-pack of beers, so we can throw out beers to the audience,” says Rockwell.

I don’t know anybody who’s going to complain about free beer at a live show.

The Stick Up Kids are bringing crowd control to a new level by inviting their fans to the party, while at the same time showing love for the poetry. For Deacon Trillionaire, who is the only member of the 87 Stick Up Kids not from Los Angeles, hailing out of Decatur Atlanta, the love of the words is what brought him into hip-hop and emceeing in the beginning.

“That’s what I fell in love with from the jump ... I feel like it the difference between the simile and the metaphor, I mean you become the thing that you talk about, you’re not saying I’m like a hurricane, you’re saying, mother[expletive], I’m a hurricane!”

The guys are all big fans of the art as well. Listing artists such as NAS and A Tribe Called Quest as a couple of the greats, and also giving props to mainstream artists like Kanye West. For them it’s just about speaking about where they’re at, making it clever, and making it dope, all while rocking out with a punk rock spirit. With their new album set to drop and some high-energy videos on youtube, the guys are making moves to blow up, and so far it sounds like they’re holding it down.