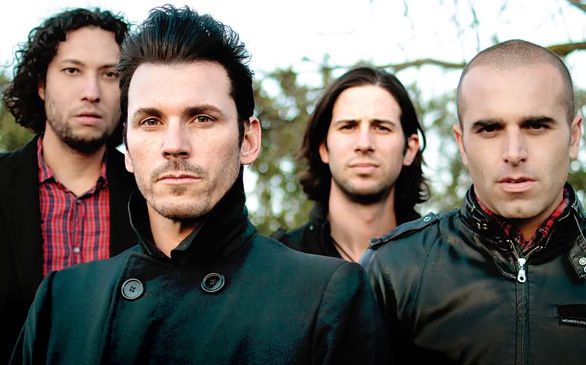 Los Angeles-based rock band Golden State has racked up some amazing credentials, all without the help of a major label. The band’s songs have been heard on a myriad of TV shows including “Private Practice,” “The Gates,” “Flashpoint,” “Teen Mom” and “16 and Pregnant.” Some of the songs heard on TV will appear on the self-released Golden State full-length Division, set to drop on July 19. Don’t worry about seeking out reruns to hear Golden State though; it’ll be a lot more fun to see them live at the Viper Room May 18 or at the Silverlake Lounge May 24.

To celebrate the release of their new single “If I Was You (OMG)” from their debut album, Free Wired, chart-topping group Far East Movement has launched a contest that challenges college students’ artistic creativity. The electro-pop quartet is encouraging students to upload an “If I Was You (OMG)”-inspired video to YouTube, then message the group a link to the video on their Web site fareastmovement.com.

The video should be 30-seconds long and the winner will be selected randomly from the top five highest view count submissions. What’s at stake? The multi-platinum hit makers will arrive at the winner’s college dorm room with pizza and host a private show for the winner and 10 friends.

“Take a break from the books and let the creativity flow,” says the group’s Kev Nish. “We’re excited to invade the winner’s dorm room and get the whole campus Free Wired!” Videos must be submitted by midnight May 20.

Ska band Less Than Jake ran into some unexpected turbulence when they arrived for a recent show in Pensacola, Fla. Members of the Westboro Baptist Church were picketing the venue where the band was playing, holding signs referring to “whore mongering, adultery and sin.” The show went on, and band members have no idea why the controversial religious group targeted them.

“Let’s face the facts,” says a perplexed Vinnie Fiorello. “Less Than Jake doesn’t exactly send parents running for cover. We do have a certain amount of obscenity and are fairly liberal; obviously that ruffled some Christian feathers. But grouping us with recent targets like Lady Gaga is like comparing apples to oranges.”

The drummer further comments that, “They have a right to say what’s within their rights as long as I’m allowed to create whatever art I want.”

The music community has lost three members. TV on the Radio issued this brief statement about the death of bass player Gerard Smith: “We are very sad to announce the death of our beloved friend and band mate, Gerard Smith, following a courageous fight against lung cancer. Gerard passed away the morning of April 20. We will miss him terribly.” Smith was 36.

Cancer was also the cause of death of legendary punk singer Poly Styrene of the X-Ray Spex. Styrene’s (real name: Marianne Elliot Said) work on the Spex album Germ Free Adolescents is considered a seminal influence on Britpop and Riot Grrrl, and her album Generation Indigo has just been released. Styrene died on April 25 at the age of 53.

UK band/DJ collective Dirty Vegas has released a new album called Electric Love in coordination with a brief American tour. The last show of the tour is at Bardot in Hollywood May 9, where the trio will play a DJ set.

San Fernando Valley act Culprit has just released an EP called Analogue, and you can download the song “Strangers” for free at absolutepunk.net. Then see the band live in the Plush Lounge at the Key Club June 16.

Laura Stevenson & the Cans are offering their just-released, Sit Resist, album for free download during the month of May. Grab your copy at laurastevenson.tumblr.com.

Brooklyn’s Neighbors are also offering up free music; download your copy of the four-cut EP August at neighborsmusic.com beginning May 24.