Summer TV Preview: Who, Where and What to Watch 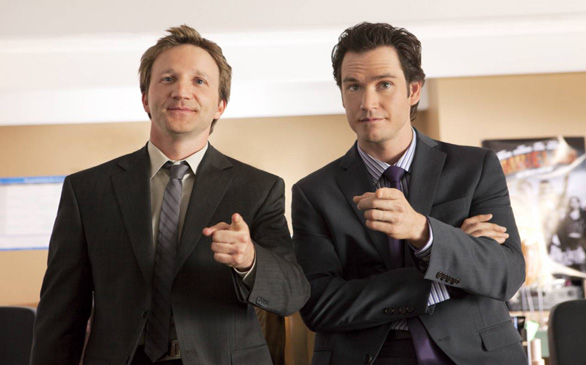 Back in ancient times – circa 1999 – television was a desolate wasteland full of stale reruns and shrugged-off specials once May sweeps ended and network audiences were left breathless by cliffhangers that wouldn’t be resolved until September. Oh how times have changed.

This summer, after you’ve stripped off the swimsuit and put down that trashy beach novel (on your Kindle), rev up the DVR, plop yourself down on the couch and let the TV gods entertain you during the sweltering months to come. Remote controls ready … aim … and watch.

“So You Think You Can Dance” (premieres May 26, Fox) – The hot tamale train is just around the corner! Television’s best dance competition show (no question, the best) returns once “Idol” ends, and we shall be bestowed with more talented hardbodies, more breathtaking choreography and of course, more of Mary Murphy’s signature shrieks.

“Teen Wolf” (premieres June 5, MTV) – Or what I like to call The Werewolf Diaries. For those too young to remember the ’80s flick starring Michael J. Fox (the Back to the Future dude), tune in to this 21st century update in which a high school lacrosse player (Tyler Posey) gets bitten and deals with the hairy consequences. Taylor Lautner/Jacob jokes to inevitably follow.

“Extreme Makeover: Weight Loss Edition” (premieres May 30, ABC) – Because America can’t get enough of watching the obese suffer through some humiliation and triumph over a plate of carbs, producers have come up with this latest reality entry that celebrates lifestyle changes and the fragility of the human condition (See also: OWN’s “Addicted to Food”).

“Platinum Hit” (premieres May 30, Bravo) – Kara DioGuardi and Jewel search for America’s next top songwriter. In true reality-competition fashion, the writers have to be able to sing their material in addition to crafting their radio-friendly singles. Someone break out the Auto-Tune!

“Franklin & Bash” (premieres June 1, TNT) – In Mark-Paul Gosselaar’s umpteenth attempt to star in a successful series, he teams up with Breckin Meyer to play a dashing lawyer at a firm surrounded by other attractive legal eagles.

Switched at Birth” (premieres June 6, ABC Family) – The title says it all. Two sets of parents learn that the daughters they’ve raised aren’t their biological kids, and what happens next is the PG stuff melodramas are made of.

“Happily Divorced” (premieres June 15, TV Land) – This oxymoronically titled sitcom stars Fran-“The Nanny”-Drescher as a woman who still lives with her ex-husband after he comes out of the closet. Something to watch after “Retired at 35” with your grandma – because you should visit her more often.

“Falling Skies” (premieres June 19, TNT) – Noah Wyle leads a band of human survivors to salvation in what appears to be a serialized version of Battle: LA. But better. Way better.

“Wilfred” (premieres June 23, FX) – Welcome back Elijah Wood! So glad to have you back in the spotlight after counting your Lord of the Rings money and enduring a few disappointing direct-to-DVD flicks. This comedy, from the warped mind of David Zuckerman (“Family Guy” and “King of the Hill”), is about a young man who forms a friendship with a dog he views as a guy in a costume while the rest of the world sees him as a furry canine.

“Necessary Roughness” (premieres June 29, USA) – Keeping up with their “Characters welcome” motto, USA delivers this one-hour about a therapist (Callie Thorne) who begins to treat football players and is introduced to the crazy world of pro sports.

“Alphas” (premieres July 11, SyFy) – Learning from the ginormous failures of “Heroes,” the cable network that brought us “Warehouse 13” and the Americanized “Being Human” delivers this actioner straight out of the comic books. David Strathairn heads up a group superhumans who fight – what else – crime.