Celebrations in U.S. Over News of bin Laden's Death 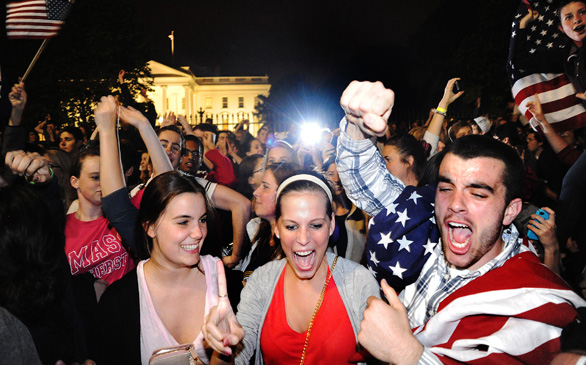 There were joyful cries of victory. There was skepticism from those who demanded to see a corpse. There were huge crowds waving U.S. flags outside the White House, and people erupting into chants of “USA!” on the dark streets around ground zero in New York. And there were the bitter words of a mother still mourning the son lost on Sept. 11, 2001. There was no shortage of reaction across the nation to the news late Sunday of Osama bin Laden’s death, but in the city hit hardest by the attacks, joy at the news was tempered with anguish over the loved ones lost a decade ago, and the time it took to end the reign of the world’s most wanted terrorist.

There was also a tacit acknowledgment that the killing of bin Laden by U.S. forces in Pakistan could have repercussions. New York police were reminded “to remain alert in the aftermath of the announcement.” In the minutes after the announcement came from the White House, though, there were few signs of worry - not even in Times Square, where exactly one year earlier, a Pakistani-born immigrant angered over the U.S. war in Afghanistan had tried to blow up a car bomb. On this night, passers-by clambered atop a New York fire truck as the news blazed in giant letters across the neon billboards surrounding the square.

A few miles south, the darkened streets around ground zero came to life as crowds surged toward the massive construction site, blasting horns, singing “God Bless America.” It began as a slow trickle, then grew to hundreds. Some men shimmied up a light pole and popped corks from champagne bottles over the swelling crowd. Police blared sirens and blasted bagpipes through loudspeakers.

“There’s no better place in the country to be right now,” said David Polyansky, 40, who rejoined the Marines after the Sept. 11 attacks and served a year in Iraq. He now lives near ground zero.

The news triggered a massive emotional release in Washington, where a spontaneous celebration erupted on Pennsylvania Avenue, along the White House fence. A mostly young crowd ecstatically waved flags, cheered and sang the national anthem, its numbers growing from dozens to hundreds and beyond as midnight passed. People sprinted from around the downtown Washington area to join in the jubilation, which took on the air of a city celebrating a professional sports championship.

“I was watching on CNN and just the excitement, I couldn’t miss it,” said Derek Guizado, 25, a Georgetown law student originally from Los Alamitos, Calif. “I had to come down here for this. This is such a big moment.”

Participants and commentators could not avoid the comparison to the scene nearly 10 years ago, when the same streets were gripped in fear as the Sept. 11 attacks unfolded. It also was impossible not to contrast the jubilation in the streets with the quiet contemplation expressed by relatives of those who lost their lives in the attacks, such as Jay Winuk, whose brother, Glenn, died at the World Trade Center.

“I don’t know if we’ll ever quite feel closure,” said Winuk. “It’s hard when you think about it. I don’t know what my brother’s last moments were like. We only got partial remains back. How does that bring closure?”

“There’s no such thing as closure,” said Rosemary Cain, whose firefighter son, George C. Cain, died that day while doing his job. “There would be closure if my doorbell would ring and my son would be standing at my front door,” she told NY1, New York City’s all-news channel, making no attempt to hide the bitterness at her loss. “I’m glad he’s dead,” she said of bin Laden.

Paula Berry, whose husband died at the World Trade Center, said her 17-year-old son, Reed, put it beautifully when he said that bin Laden’s death would not bring his father back or restore their lost years.

“But it does ensure that (bin Laden) will never play a role in taking the life away from an innocent person,” Reed told his mother.

Most family members reached said they were still too stunned to fully absorb the news. Some, like Winuk, said they looked forward to hearing more details of the terrorist leader’s death. Others, like Pat Shanower, whose son, Navy Commander Dan F. Shanower, 40, was killed in the Pentagon, said relief at bin Laden’s death was tinged with worry for the future.

“It’s one step, I hope, for an eventual peace for our country,” she said. But Shanower added, “I don’t think this is the end. ... I’m sure there are people that are going to fill bin Laden’s shoes now.”

Others said it would take time to feel true relief. Outside the homes of those still mourning the loss of loved ones, though, nobody needed time to start celebrating. In Tuscaloosa, Ala., a man drove through the parking lot of the Wal-Mart with his window down, shouting at strangers.

In Los Angeles, about 25 Jewish students at the University of Southern California were just finishing a ceremonial dinner at the campus Chabad House when whispers began making their way around the table and diners became focused on their phones.

The room erupted in cheers and high fives.

To the south in Long Beach, Calif., Del Warren, whose 28-year-old son, Kyle, was killed by a roadside bomb in southern Afghanistan, said he started tearing up when his son’s widow texted him with the news. It’s fabulous,” Warren said, glued to the television set. “That’s the reason my son was over there. This is just huge.”

At an upscale Italian restaurant in South Lake Tahoe, Calif., a party asked its waitress whether she’d heard the news of bin Laden’s death.

“I thought we killed him a long time ago,” she said, and glanced at her note pad.

“We should have strung him up,” one of them said.

Staff writers Kim Geiger and Michael A. Memoli in Washington, Mitchell Landsberg in Los Angeles, Kate Linthicum in Tuscaloosa, Ala., Ashley Powers in South Lake Tahoe, Calif., and Rex W. Huppke of the Chicago Tribune contributed to this report.