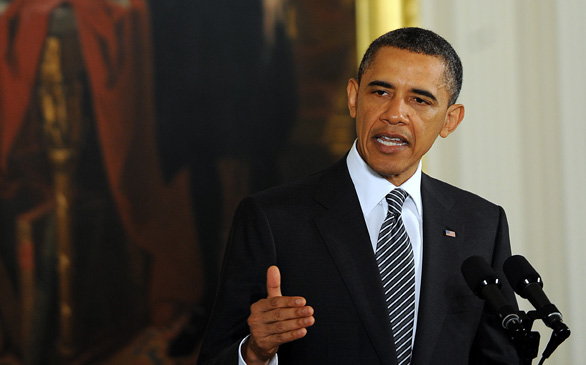 A foreign policy novice when he came to office, President Obama can now claim a national security victory that eluded his predecessor for almost eight years. The caliber of his leadership, often the target of withering attacks by the Republican opposition, has now been bolstered in a very tangible way, as the image of celebrating crowds gathering spontaneously at the White House and the former World Trade Center in New York late Sunday night demonstrated.

In his speech to Americans announcing the death of Osama bin Laden, he made clear Sunday night that he had been in the driver’s seat all along, noting that he had approved the operation at its key moments. And he could trumpet that no Americans were harmed in the mission carried out by U.S. special forces.

More details are likely to emerge in coming days that could alter public attitudes. And the unexpected news that “justice had been done” after almost a decade-long hunt may not be the turning point many Obama supporters would like it to be. Similar developments over the years, such as the successful Persian Gulf war of the early 1990s or the apprehension of Saddam Hussein in 2003, did not prove to have lasting impact. But the immediate result will almost certainly help Obama’s sagging popularity, which had returned to its lowest levels in the midst of high gas prices and even questions about the legitimacy of his presidency.

The development is “a great boost for him, as it would be for any president,” says pollster Andrew Kohut, who directs the nonpartisan Pew Research Center.

“This is the most symbolic victory he could have,” Kohut says. “It’s not the end of the war on terror, but it is likely to be seen as a great achievement for the country.”

In tracing the roots of the successful mission back almost a year, Obama may have validated his oft-criticized reputation for caution. In combination with the military surge that Obama ordered in Afghanistan and the recent attacks on Libya, the successful operation to kill bin Laden will make it much more difficult for a Republican to employ in next year’s campaign the familiar charge that Democrats are weak on defense. Obama was able to proclaim that “the most significant achievement to date” in the war against al-Qaeda was a triumph for the U.S. military and intelligence personnel who hunted down and killed the architect of the Sept. 11, 2001, attacks, and that no Americans were killed in the operation. By comparison, another Democratic president, Jimmy Carter, had to break the sad news to the nation that a rescue attempt to free the U.S. hostages in Iran had not only failed but had resulted in the loss of U.S. lives.

“This can be portrayed credibly as one more example of a president willing to take the long view for success and to achieve it,” says Bill Galston, a former Clinton White House aide. “It is also likely to generate a reevaluation of [Obama’s] foreign policy apparatus, which hasn’t exactly been showered in praise.”

Beyond that, Obama has further elevated himself above a field of Republican challengers that is remarkably lacking in foreign-policy expertise, unlike his 2008 opponent, John McCain. Initial reaction from GOP presidential candidates is, as might be expected, positive. Former Massachusetts Gov. Mitt Romney calls it “a great victory for lovers of freedom and justice everywhere” and praises “our intelligence community, our military and the president.” Former Minnesota Gov. Tim Pawlenty calls it “terrific news for freedom and justice.” He recalls President George W. Bush’s promise that America would bring Bin Laden to justice, “and we did. I want to congratulate America’s armed forces and President Obama for a job well done.”

In the short term, the impact could reverberate across a range of endeavors, starting with U.S. relations with Pakistan and stretching across ongoing conflicts in the Muslim world. Obama sought Sunday night to rekindle memories of the national unity that prevailed after the shock of the Sept. 11 attacks, and to use Bin Laden’s death as a reminder that Americans can accomplish that to which they set their minds. But the partisanship of Washington may overcome the elation of the moment as Democrats and Republicans get down to the hard work of hammering out deals on national debt and the budget.

In purely political terms, the impact is unlikely to be as long-lasting as Democrats might hope, with the 2012 election still more than a year and a half away. And it is not directly linked to the public’s top priority, which remains the domestic economy and the dearth of jobs nationwide. But it may well remind Americans, and the world, of the unparalleled might of the U.S. military establishment, and of Obama’s own resolve.

Facing serious questions about his strength on military matters, candidate Obama made the hunt for Bin Laden a key priority during the 2008 campaign.

“We will kill Bin Laden. We will crush al-Qaida. That has to be our biggest national security priority,” Obama said in an October 2008 debate with McCain.

On Sunday night, in announcing that the long nightmare for thousands of victims’ families was at an end, the president reported momentous progress toward that pledge.