Dodgers Looking Back: It's time for ... a change of ownership. 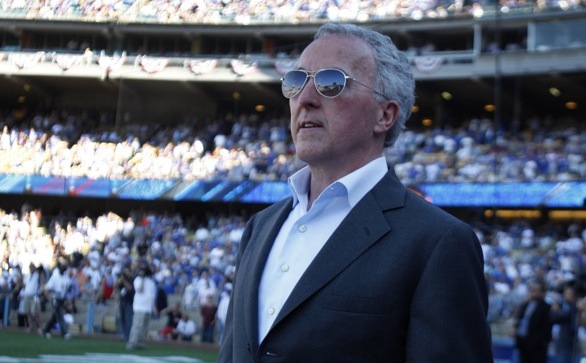 If you’ve driven the streets of Los Angeles in the last couple months you’ve probably seen the billboards. “It’s Time For Dodger Baseball” they read and vary on the theme, time for this or that. In each instance calling toward nostalgia, the good ol’ days, if you will. Looking back, the ad campaign seems to say: Recall happy memories of sunny youthful days, be touched by the endurance of our national pastime and those loveable Dodgers. With a simple and down-home layout using only the classic Dodger logo, the campaign seems designed to pull on heartstrings and fond memories. It is markedly different from the loud and flashy “This Is My Town” of recent years. On the one hand, the new campaign would seem an improvement. There was something a tad unnerving, almost vulgar about the “My Town” slogan in light of the bitter McCourt divorce trial deciding ownership of the team. The latest campaign in calling attention to nostalgia seems designed to take our focus away from the present state of the franchise.

As the Dodgers enter the second week of May struggling to reach .500, media coverage has focused primarily on events happening off the field. I am referring of course to the decision by MLB commissioner Bud Selig several weeks ago to appoint a “monitor” to investigate the financial state of the franchise. The most recent media reports indicate that co-owner Frank McCourt does not have the money to meet payroll for the end of May. McCourt says if only MLB would approve a three billion dollar television deal with Fox, everything would be hunky-dory. Meanwhile Commissioner Selig shakes his head “no” and says nothing. The clock ticks toward payday, and we all wait to see what happens.

It has the makings of a good drama: A beloved ball club held in the grips of an ambitious owner as he faces off a stony commissioner, a real nail-biter. There are elements we have seen before; passion, pride, hubris and characters we recognize. An old Greek myth comes to mind. The story of Narcissus tells of a man who falls in love with his own image in a pond. So enthralled is he by his own reflection that he becomes insensible to the world around him. Surely, to have a grand notion of one’s self and be guided by self-interest is common enough in our world, but for some individuals the condition becomes an advanced clinical neurosis. The disorder known as narcissism takes its name from the ancient myth and is marked by illusions of grandeur, preoccupations of unlimited success, a sense of entitlement, lack of empathy, a disregard for others and a constant need of attention.

McCourt and his ex-wife showed classic signs of narcissism. Their obsession with self-image led to astronomical expenditures on clothing with a $100,000 haircut budget in one year alone! A sense of entitlement (“This Is My Town” taken literally). Visions of unlimited success led Jamie McCourt to consider a run for President and Frank to talk of an imminent World Championship in the near future and an ambitious plan to develop the parking lot around Dodger Stadium. But now the attention is focused on Frank. He is the one fighting now.

“Nobody handed me the Dodgers, and nobody will take them away,” McCourt said in the first and only press conference after the decision from MLB.

The defiant words are chilling if for no other reason because they are so delusional. The McCourts were entrusted with the Dodger organization by the commissioner who has the jurisdiction to take them away by claiming the “best interests of baseball.” That notion of behaving in the “best interests” of everybody involved may be incomprehensible to Mr. McCourt. He would be wise to ask himself why he wants the Dodgers before asking for the support of the fans.

Behind the ego-driven impulses of narcissists there is often a profound insecurity and longing for approval. It is easy to imagine that the roar of a crowd at Dodger Stadium on a summer’s night was salve to a fragile and wounded ego. The attention McCourt received must have fortified a sense of self-importance. But what he may fail to recognize now is that those crowds have dwindled, the roar of applause fallen quiet on him and will probably never return.