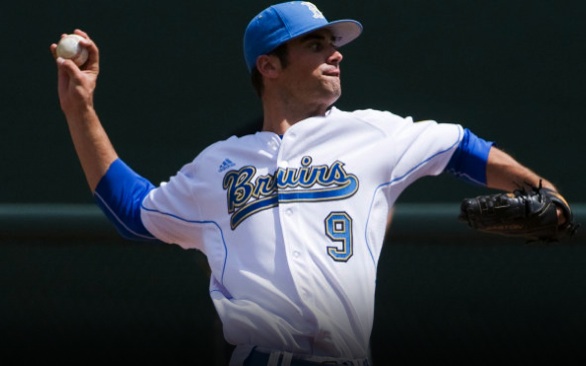 Adam Plutko and the Bruins are on a five-win streak.
(Credit: uclabruins.com)
UCLA

In a total of four contests, the now unranked UCLA Bruins baseball squad only allowed two runs. Their pitching was solid throughout the week in one non-conference game before a three-game Pac-10 set.

UCLA’s winning ways began with a 10-0 pummeling of Pepperdine in Malibu. Right-hander Zack Weiss (5-1) tossed six innings, allowing no runs, seven hits and two walks while striking out seven Waves. Brandon Lodge and Scott Griggs combined for a three-hitter in the remaining three innings. The game did not feature any runs from either side through five innings of action, but UCLA broke the spell atop of the sixth after scoring twice, followed by four runs in the seventh. Three different hitters collected two RBI each. Oregon entertained UCLA for three games during the weekend, as the Bruins gathered wins by scores of 7-1, 3-1 and 4-0, respectively.

Saturday’s game included more of the same for the Bruins, who allowed just one run behind Trevor Bauer’s complete game. Bauer fired the nine innings on four hits, three walks, one run and fanning 12 Ducks.

During the series finale on Sunday, the Bruins received another great pitching performance. Freshman Adam Plutko threw nine innings of two-hit ball while gaining the shutout, walking one and striking out seven.

The UC Riverside Highlanders paid the USC Trojans a mid-week non-conference visit, as they collected a 10-6 victory. The Trojans (18-26) saw six total pitchers take the mound in an effort to shut down the Inland Empire team. Matt Foat went two-for-four with two RBI, while the Highlanders managed 10 runs on 13 hits.

USC entertains Arizona State, currently in second place of the Pac-10 standings, for three games over the weekend, starting with Friday’s 6 p.m. affair.