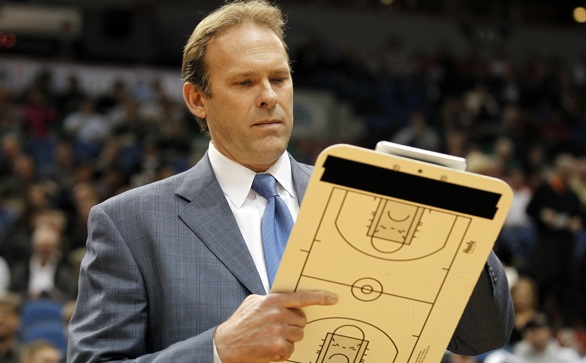 Will Kurt Rambis return to the Lakers?
(Credit: Carlos Gonzalez/Minneapolis Star Tribune/MCT)
Kobe Bryant and the Lakers are now out of the 2011 playoffs after the Dallas Mavericks blew out the two-time defending champions in Game 4 Sunday afternoon, 122-86.

For the first time in his history, one of Phil Jackson’s postseason squads experienced a 4-0 deficit and thus elimination. Now, Jackson will probably retire, head to Montana and simply rest hereafter.

As for the next head coach of this proud franchise, several names have already been mentioned in the media: Mike Brown, Rick Adelman and Brian Shaw. However, Lakers general manager Mitch Kupchak should be on the phone soon and calling Minnesota.

Why Minnesota? Well, a former Laker and assistant to Jackson coaches the Timberwolves there. Yes, Kurt Rambis is the perfect candidate to next coach the purple and gold. He knows the triangle. But then again, we do not know what personnel the team may or may not have in the 2011-2012 season. Heck, it is uncertain if another season will exist with the imminent CBA contract looming around.

One thing is for sure, however, if Rambis or Shaw becomes head coach, the triangle will be back with the Lakers. Potentially with that, most of the current players would be back as well. Both Matt Barnes and Shannon Brown have options for next season, so re-signing them would be key.

But what do the Lakers really need to do? As a beginning piece, they could explore the possibility of upgrading to a speedy, yet athletic point guard. Then, perhaps knock some sense into Ron Artest; if not, simply sign some youth at his position after trading him.

Bryant is untouchable. So, the Lakers could easily place all their other pieces on the trade block, including Andrew Bynum, Pau Gasol and Lamar Odom. These three players could serve as bait to acquire Orlando Magic center Dwight Howard, who has expressed interest in becoming a Laker.

We can rest assured that this upcoming off-season will be a busy one for the Lakers, starting with the search of the next head coach.