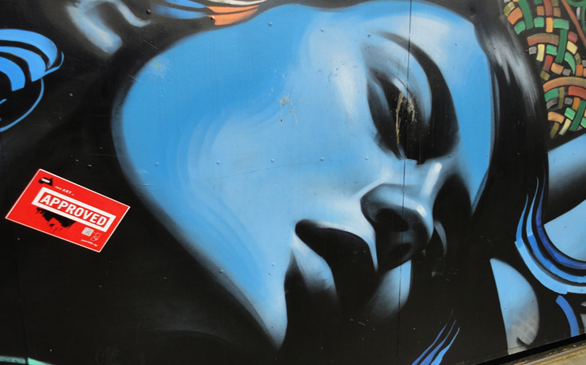 Ever wondered what it is like to be an art critic? Well, you now have a chance to play the part of being the judge of what is appropriate art and what isn’t through MOCA-latte’s Red Sticker Campaign.

Hosted by a privately owned grouped known as MOCA-latte, the campaign strives to ablaze a heated discussion of art in the L.A. area, and in the end create a greater public awareness of one of the most celebrated products of culture: art. MOCA-latte has designed for the L.A. public a project to engage in where they will have the excitement of actively being a part of approving and disapproving different street arts they see around the city.

Before going into the specifics of how you can be a part of the L.A. art scene, lets look into the campaign a bit further. It all started off when the director of the Museum of Contemporary Art (MOCA), Jeffrey Deitch, whitewashed a mural he commissioned from Blu, a rather notable Italian street artist. The mural presented military-style coffins draped with dollar bills instead of American flags. Get the message? Of course, with such heavily loaded political imagery, Deitch was afraid of causing unnecessary uproar … so he chose to get rid of it. The result? He was ridiculed for his actions in art blogs and discussions for destroying a significant work of incomparable creativity. Interestingly, an uproar did rise – protests in the form of art in response to Deitch and his acts of censorship. What was supposed to be a preliminary action to stop political uproar in the end only started a whole new art trend. Deitch’s action caused great debate and awareness of what should be labeled as art and what museums’ roles were in an element of culture filled with creativity and individualism.

“It was exciting to see this level of discussion about art in Los Angeles – a pretty rare occurrence in this city,” says Nick Douglas, the mastermind behind the campaign.

Blu’s work was supposed to be a runner-up for the current exhibition at the MOCA, Art in the Streets. The exhibition is truly sensational for street art lovers, in that it is the first large-scale museum exhibit representing the history of graffiti and street art. Up until early August, the museum gathers and showcases at least 50 different artists from the street art community all over the world. With such rise of museum exhibits dedicated to street art, MOCA-latte’s Red Sticker Campaign appeals for another heated debate on the position of street art in the society of art.

MOCA-latte, desiring a replay of the effects is bracing for the moment of another sizzling debate through its red stickers. Participants will be provided with a batch of ‘approved’ and ‘disapprove’ stickers to stick on any type of street art of their choosing. Don’t worry about ruining the art, because the stickers are easily removable without defacing the art itself. Just remember to try and stick the stickers somewhere along the edges. After accordingly sticking the seals, take a snapshot of your decision and e-mail your image as an attachment to photos@moca-latte.org.

To find a more specific description of the project you can always visit MOCA-latte.org, for information on where to get your stickers, and such.

This is a truly magnificent opportunity for those finding themselves pulled to the arts. Even if you can’t draw on your own, it is an unprecedented chance to become a part of the community as an amateur art critic and play “Deitch for a day.”